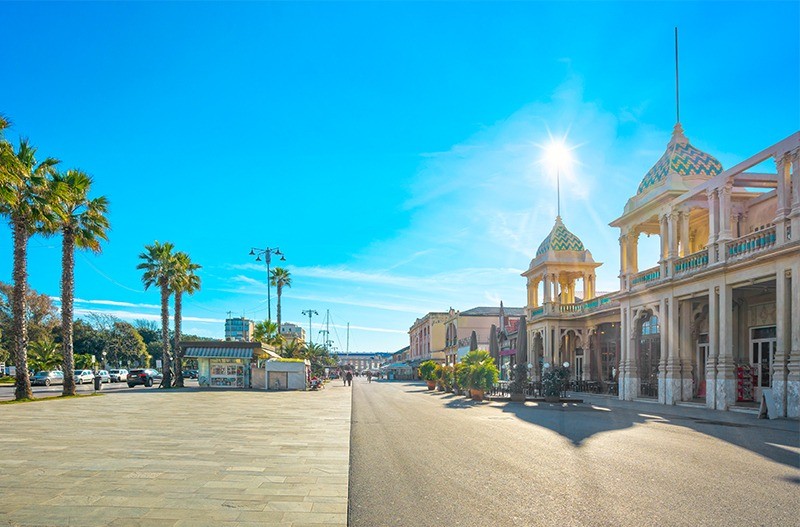 The Gran Caffè Margherita is one of the most representative buildings of the Viareggio beachfront promenade, capable of creating a sort of aesthetic shock, far away from the typical seaside resort image.

It is a refined and sublime place, and, like all the buildings on the avenue, it runs along the sea, creating a suggestive atmosphere for anyone strolling in the area.

A perfect example of Italian Liberty style, enriched with Arabian features,  characterized by two symmetrical turrets that streamline its structure. The decoration, made with green and yellow ceramics, adds a fascinating scaly tone to the blue of the sky.

Surely at the time of construction, Tito Chini, great-grandson of the well-known Galileo, was inspired by the oriental world that he had the opportunity to visit and re-propose once he returned to Tuscany. The artist at the time was  really famous, to the point that he was commissioned by the king of Siam to build the imperial palace in Bangkok.

The terrace decorated with small columns overlooks the triumphal entrance leading to the cafeteria, currently converted into a restaurant  next to the Mondadori bookshop.

It still preserves the original furniture: the only changes were made to  adapt each area to its current function in particular the marble floor and the chandeliers. So once you cross the doorstep, time seems to have stopped  in  the elegance and refined  intellectual salon of the past.  Arcades of the  portico outside ,  while  inside the rooms are embellished with paintings and frescoes that evoke the nineteenth-century Viareggio atmosphere, integrating perfectly with the arabesques and balconies.

Originally the building, which dates back to 1902, was made of wood, as all the other buildings that lined the sea. The original project provided for an open gallery that would have made it possible to easily reach the sea from the Promenade: actually today the gallery is closed. Due to a tragic fire in 1917, renovations were done by  Belluomini and Galileo Chini  which have led to the image of today, the famous Café, since 1928.

Giacomo Puccini, who had moved to Viareggio  around 1921, used to usually go to the Cafe   to work on his “Turandot”.

They say  the composer loved to go there after busy daytime work  to relax looking at the  sea or  even to meet his friends. The Cafe became   the most elegant salon in Viareggio, sought after by men of culture, artists, intellectuals and aristocracy.

During the first quarter of the century

And dear friends of the Maestro

Met at this table

a place to meet and

recreate oneself  as simple civil conversationalists

Around his immortal art.