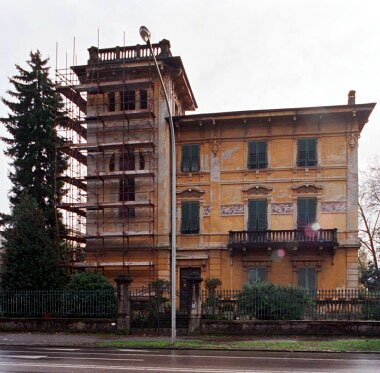 The rectangular based villa which was built in a vast garden, in part consists of three floors in addition to the cellar and has a pavilion roof surfaced with Marseillais roof tiles. On the east side you will find a vertical body which surpasses the rest of the building by one floor and is covered with a terrace.
All façades on the ground floor are covered in smooth imitation ashlar which is interrupted by simple openings. It stops at the height of the fascia indicating floor division which runs from the level of the first ceiling to the level of the window sills of the first floor. The terrace, featuring a parapet in cement columns, runs along part of the main façade of the first floor and the east and west sides of the building. The windows on these two façades in addition to the eastern ones have architraves in a depressed arch with festoons of flowers and a written inscription of the word "Peace". Decoration in polychrome majolica depicting ducks in flight by Galileo Chini runs between one window and another. The windows on the second floor are underlined by a fascia indicating floor division that is similar to the one which runs between the ground and first floor.
The frontal and lateral façades of the raised body on the east part of the villa feature two large windows with polychrome glass and decoration in wrought iron. The lower part of the windows is rectangular in shape while the upper part is circular from where two fascias in majolica and coloured wedges begin. The raised part of this body on every façade has a rectangular opening which is divided into three parts by little squared columns. It is completed above with a depressed arch.
The windows on the third floor are smaller in size than those on the other floors and are finished off with simple cornices.
The corners of the building are underlined by pillar strips which run from the cornices indicating floor division to the eaves, which is decorated by elements in plaster in flower garland shapes.
The building is a private property and cannot be visited inside.

The building was planned by an engineer called Daniele Del Magro in 1912. He was one of the most active designers in Lucca at the beginning of the 1900's.
He projected this house for himself after having returned to his city from making his fortune abroad.
During the Twenties a part of the internal staircase was restored by the Arch. Gaetano Orzali. Immediatly after the second World War the veranda on the ground floor and part of that on the first floor were closed. In 1971 the back stairs on the south facade was demolished and a spiral staircase has taken its place.
(source: Lorenza Caprotti - Centro Studi Cultura Liberty e Déco)

District: Piana di Lucca
Building dating: 1912
District/Location: The building is a private property and cannot be visited inside.
Get directions