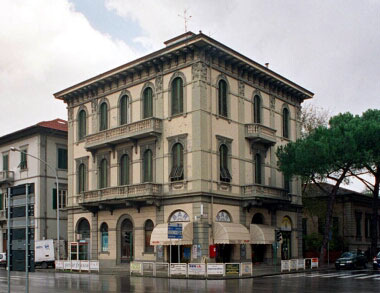 The square based building consists of three floors and a cellar and is covered by a hip roof which bears a layer of Marseillais tiles.
The main façades face west, overlooking the ring road and south looking onto Viale Cadorna. On the east side the villa looks onto a garden.
On the ground floor the facades which look onto the avenues are modularly separated by imitation ashlar pilasters which frame large round arch openings and then become smooth until below the eaves where they are adorned with anthropomorphic depictions. The main entrance opens onto the west-facing façade. All entrances have wrought iron rostre on the vaulted part and are brought together by a stone-built fascia which runs alongside the chords of the arches. On the first floor there are vaulted arched windows which have decorated frames, finely shaped corbels and festoon decoration. In both of the main facades There is a large terrace with corbels and balustrades with alettes.
The second floor has windows and terraces similar to those aforementioned, but in a simpler manner.
The part below the eaves is decorated with large moulded corbels.
Each floor is defined by two cornices which run horizontally along the facades.
The building is a private property and cannot be visited inside.

The villa was build by Del Magro during the first decade of the Twentieth century, on the road, at that time recently opened, which faced onto Porta Elisa in the direction of Pescia.
Between the time of its construction and the present day, there have been neither significant changes to the external appearance of the villa nor significant modifications to its interior. Therefore, the villa still appears the same today as it did when it was designed.
(source: Lorenza Caprotti - Centro Studi Cultura Liberty e Déco)

District: Piana di Lucca
Building dating: First decade in the XX century
District/Location: The building is a private property and cannot be visited inside.
Get directions