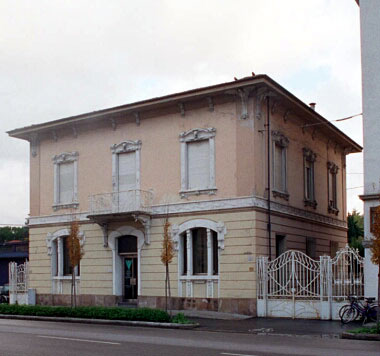 The building, which stretches across two floors and also has a cellar, has a square base and a compact structure. It is covered by a hip roof with Mareillais tiles.
On the ground floor the front-facing façade is marked by ornamental imitation ashlar fascias which are interrupted by three openings, the doorway in the middle and two windows to the side which are surmounted by depressed arch frames and decorated with phytomorphic and zoomorphic motifs.
On the first floor, separated from the one below by a skirt roof which is decorated with bas-reliefs depicting storks, there are another three openings which are symmetrical to those on the lower floor. They are surmounted by an architrave, a bas-relief which depicts a stork with its wings spread and a small projecting façade decoration. The strip below the eaves is characterised by small corbels decorated with phytomorphic designs and it ends at the corners of the building where there are two pilasters with two storks.
Yet another two storks, facing each other, design the wrought iron railings of the central terrace, supported by corbels which are also in the shape of storks.
The building is a private property and cannot be visited inside.

The Villa, which is among the most important examples of the range of Liberty period buildings constructed in Lucca, was realized by the architect Giovan Lelio Menesini for the Martini family in 1911. This was a particularly fervent building period in the area of Sarzanese road at S.Anna which had just been directly connected to the city centre following the opening of the new Vittorio Emanuele IInd gateway in the city walls.
Between the time of its construction and the present day, there have been neither significant changes to the external appearance of the villa nor significant modifications to its interior. Therefore, the villa still appears the same today as it did when it was designed.
(source: Lorenza Caprotti - Centro Studi Cultura Liberty e Déco)

District: Piana di Lucca
Building dating: 1911
District/Location: The building is a private property and cannot be visited inside.
Get directions