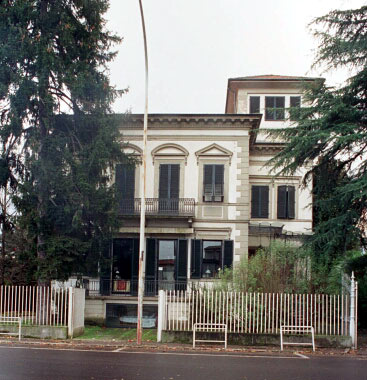 The villa is a construction of vast dimensions and it has an articulated base. It is covered by a hip roof with Marseillais tiles. The building, which is located in a garden enclosed by wrought iron railings, comprises a cellar, two floors above ground level and, on the west-facing side only, a higher floor in the form of a turret.
The symmetric layout of the façades is realised using architectonic components in dark grey plaster which stand out against the white plaster on the walls.
From Viale Puccini the part of the villa which is set in the direction of Viareggio presents a recess which constitutes the main entrance and forms a terrace entrance from which access is gained to an internal staircase. The terrace, to which access can be gained by way of a short flight of stairs, is girded by wrought iron banisters and covered by a glass protecting roof which is supported by corbels, also in wrought iron. Another two entrances are in the form of French doors which, together with the two lateral windows beside them, open onto the terrace which is situated on the Viale Puccini façade. The terrace can be reached by two symmetrical staircases which are protected by wrought iron railings. One final entrance opens onto the south facing side of the house from another terrace to which access is gained by way of a flight of stairs.
The windows and the French doors of the villa are framed with dark grey plaster cornices which stand out against the base colour of the façade and which form a small projecting façade decoration on the upper part. A skirt roof runs along at the height of the window sills. In alignment with the terrace on the ground floor, on the first floor of the south-facing façade, there is a terrace with wrought iron railings which two windows and two French doors, each surmounted with projecting tympanums, open onto. Those appertaining to the windows are triangular, whereas those appertaining to the French doors assume the form of depressed arches. The turret has framed windows which are divided into three parts by square pilasters. In the basement, below the entrance terrace on Viale Puccini, there are three circular openings.
Each corner of the building has imitation ashlar pilasters. On all facades the cornice is decorated with frames and corbels.
The building is a private property and cannot be visited inside.

The architect of the villa is Achille Orzali (1867-1948), one of the main personalities of the Orzali family. He was brother of Modesto and uncle of Gaetano, the architect of the Villino Malerbi today Dinelli. Achille owned a building material company. He is responsible for many projects both in Lucca and in Viareggio (Landucci and Lipparelli palaces, palazzina Simi, reconstruction of the S. Marco church together with prof. italo Baccelli). His projects follow the historicist and neoclassic tradition.
The villa was built for the Lazzeroni family at the start of the XXth century. It was part of the new constructions which were built along "the magnificent Lucca-Ponte S.Pietro road" which had recently been connected by the new via Catalani to the Vittorio Emanuele IInd gateway which was opened in the city walls in 1911.
The edifice is still owned by the Lazzeroni family and an upholstery company which bears the same name has its headquarters there.
Between the time of its construction and the present day, there have been neither significant changes to the external appearance of the villa nor significant modifications to its interior. Therefore, the villa still appears the same today as it did when it was designed.
(source: Lorenza Caprotti - Centro Studi Cultura Liberty e Déco)

District: Piana di Lucca
Building dating: the start of the XX century
District/Location: The building is a private property and cannot be visited inside.
Get directions