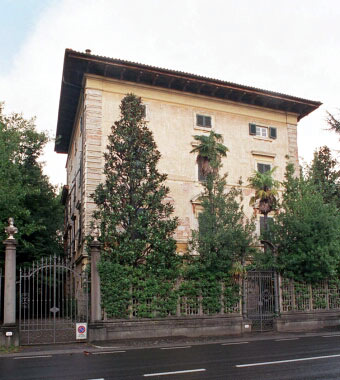 The building is one of the greatest examples of suburban villa: is developed over four floors and has a façade built in accordance with the principles of traditional Florentine 19th century architecture. Both the main and the lateral façades on the first floor feature thick rusticated ashlar work which increases in size on the sides and is crowned by a double string course. The façades are marked over two floors by windows with two types of tympanums and half windows on the last floor.
The main door which is opened facing the road, is surmounted by a terrace with a baluster featuring ionic marble columns supported by corbels in the shape of female figures. There are bulky fasces in the corners made from ashlar in plastic relief which frame the plastered façades surmounted by cornices and eaves decorated in caisson wood.
Behind the palace there is a structure made from facing brick which is three storeys high and inspired by the classic style. It features round arches and terracotta columns which open into a loggiato on the ground floor. The above floors are marked by pilaster strip capitals and are lightened due to the arched windows. This structure is completed with a large terrace where two small extensions were built during the 40's.
The proportions of the garden surrounding the villa were drastically changed due to the construction of via Paganini. However there is still a good proportion of ground and opens on to viale Puccini by way of two gates which are held up by pilasters and stone columns, the latter being surmounted by large busts made from Carrara marble featuring King Vittorio Emanuele IInd, Queen Margherita, Christopher Columbus and Amerigo Vespucci. A smaller third gate, positioned between the other two, is held up with cast iron columns surmounted by eagles in flight and a tympanum bearing the initials of the owner, Lorenzo Martinelli.
Two goblet shaped fountains made from Carrara marble sit in front on the palace and frame the main door.
In addition to the rural constructions and agricultural annexes, the garden hosts the gardnener's house and the coach house. Above this there was a belvedere covered by a pergola and was reached from the garden by way of a cast iron spiral staircase which has disappeared.
Surrounding the palace there is a layout of pathways with hedges and that continues along the walls of the property which was one hectare in size. Above the pathways there is a pergola supported by facing brick columns. The base of the building is quite regular and is square shaped and divided by an atrium which crosses the entire edifice from north to south and features the main stairs. The inside of the building holds very few tempered and decorative elements in stucco. The most significant decoration is found on the ceiling of the library on the ground floor depicting Apollo and the Muses.
The building is a private property and cannot be visited inside.

This villa is very significant for the district of Sant'Anna and is an extremely important point of reference spanning over more than a century.
Lorenzo Martinelli was a banker who had a money dealing office in the city in Palazzo Arnolfini and owned the first floor.
It is interesting to remember that Martinelli emigrated to the United States and succeeded in making his fortune in very little time. His uncle, who also lived there was Cardinal Sebastiano Martinelli, who held the position of Apostolic Delegate. When Lorenzo Martinelli returned to Lucca he bought a house and some land from some relatives and converted it into a villa. This took place during the 1880's. He put busts on the columns of the gates in perpetual memory of his American adventure. At first the building's main façade faced the garden and it had a double flight of stairs reaching the first floor. The two fountains which are today visible at the front were situated on the hemicycle of the stairs.
Then towards the end of the century, Martinelli employed an engineer called Frediani to raise the palazzo by one floor and extend at the back with a facing brick loggiato, in this way converting the façade looking onto viale Puccini into the main one and building flats to let.
The coach house was built in the garden around 1910. However this was projected by Martinelli's son-in-law, an engineer called Arturo Caprotti, who made a small pavilion in facing brick which picked up on the extension techniques using a more modern language. Above the pavilion there was a pergola which functioned as a roof to a belvedere over the garden and surrounding countryside at that time still intact.
Two small extensions were built on the terrace on the third floor around the 1940's thus permitting the construction of two flats instead of one on the top floor.
During the 80's the garden was drastically reduced in size due to accepted council expropriation for the construction of via Paganini, which meant that the land was divided into two, reducing it from a hectare to a mere 4000 square metres.
(source: Lorenza Caprotti - Centro Studi Cultura Liberty e Déco)

District: Piana di Lucca
District/Location: The building is a private property and cannot be visited inside.
Get directions