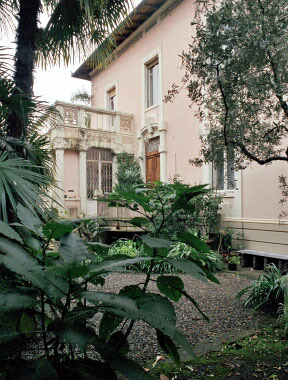 The little villa was built on Lorenzo Martinelli's property by his son-in-law, engineer Arturo Caprotti, who married his daughter Jole in 1910. The house was supposed to be used as the couple's residence in Lucca. Infact Caprotti and his family, who were originally from Cremona, had moved to villa Farneta, formerly Guinigi, at the beginning of the Century,
The architecture of the villa which consists of two floors picks up on some elements which had already been used by the designer while building Villa Giomi in via Civitali for his cousins.
The external part of the building is principally characterised by the veranda which is crowned with a terrace. Inside, a scence of a stair ideally prolongs the external stair which acts as a link between the cubic part of the villa and the veranda's volume. The latter features numerous decoration in concrete which form fasces with flowers and leaves and checked motifs while the balustrade features motifs in the shape of flower vases.
The painted decoration on the eaves fascia features convolvuli and roses in bright colours. The garden of the villa is very small in size given that it was integrated into Caprotti's father-in-law's property, benefiting from the grounds surrounding villa Martinelli, which are now separated by via Paganini.
The building is a private property and cannot be visited inside.

The little villa is particularly significant in so far as the projectionist built it for himself. Further more, it must also be highlighted that Caprotti was an industrial engineer who only occasionally dedicated himself to architecture and exclusively for his own relatives. In addition to the little villa, his construction work includes the coach house in his father-in-law's garden at villa Martinelli, his cousin's villa Giomi in via Civitali and the farm with stalls especially designed for cattle rearing in his father's holding at villa Farneta.
Arturo Caprotti (born in Moscazzano, Cremona, 1881-Milan 1938) graduated in industrial engineering in 1904 from the Polytechnic of Turin and principally dedicated himself to the study of thermodynamics and thermionic techniques realising a steam valve distribution system bearing his name, which was widely used in Italy, the United States, India, Egypt, Britain and in other European countries on locomotives and steamers. His name is also linked to patents such as the ultra fast, polycylindric, steam-powered engine, a steam pile-driver for the sea and other systems applicable to thermal machines. His career as an architect didn't play an extremely important role in his professional interests and it is for this reason that his work is significant. He did not see this as a customary job but an exercise to apply himself to with peculiar devotion. He received many honours for his activities including a gold medal from the Institute of Locomotive engineers in London and one from the syndicate of engineers of the province of Lucca realised by Francesco Petroni in 1927.
(source: Lorenza Caprotti - Centro Studi Cultura Liberty e Déco)

District: Piana di Lucca
Building dating: 1912
District/Location: The building is a private property and cannot be visited inside.
Get directions