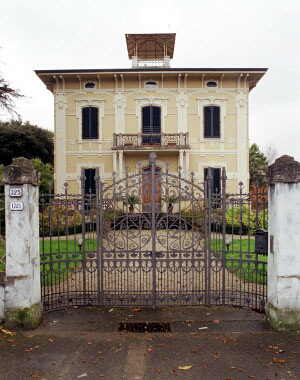 The rectangular based building is set in a garden which is enclosed by wrought iron railings. The building has two floors, a cellar, an attic and a hip roof covered with Marseillais tiles. At the highest part of the roof a quadrangular roof-terrace is covered by a four-pitch sheet metal roof which is supported by slim pilasters.
On the ground floor, at the centre of the main façade, a stone staircase leads to an entrance portico which is covered by a terrace which is in turn supported by four small columns; the main entrance is decorated with a plaster fascia which surmounts it with a depressed arch. The two lateral French doors have slightly projecting frames and architraves. The three openings, which are brought together by a plastered concrete fascia decorated with geometric motifs, open onto a terrace with rounded corners which is enclosed by wrought iron railings which are marked by small columns.
On the first floor, on the main façade, a French door opens onto the terrace which acts as the covering for the entrance portico. This French door, like all the other windows on the first floor, has piers, decorated with flowers and ribbons, which a small facade decoration adorned with floral and geometric motifs rests upon. The openings are brought together by three fascias: a stringcourse at the height of the ceiling between the ground floor and the first floor, one at the height of the window sills and a third at about three quarters of the way up the windows.
The attic has framed ellipsoidal windows.
The same decorative motifs characterise the other facades.
Pilasters, spanning the full height of the building, run across it and are in part decorated with festoons and ribbons from which rays branch off suggesting a depressed arch shape which goes on to join the stringcourse which runs below the attic windows.
The strip below the eaves is decorated with corbels depicting Acanthus leaves.
The building is a private property and cannot be visited inside.

The Villa was constructed in 1909 for the Chelini family and is still their property.
The designer's name is not known.
Like most of the buildings constructed in Lucca during the first few years of the Twentieth century, the appendage to the historical Liberty period is more due to decorative style than to plan volumetric structures which, with the exception of the unusual terrace on top of the hip roof, remain traditional.
Between the time of its construction and the present day, there have been neither significant changes to the external appearance of the villa nor significant modifications to its interior. Therefore, the villa still appears the same today as it did when it was designed.
(source: Lorenza Caprotti - Centro Studi Cultura Liberty e Déco)

District: Piana di Lucca
Building dating: 1909
District/Location: The building is a private property and cannot be visited inside.
Get directions