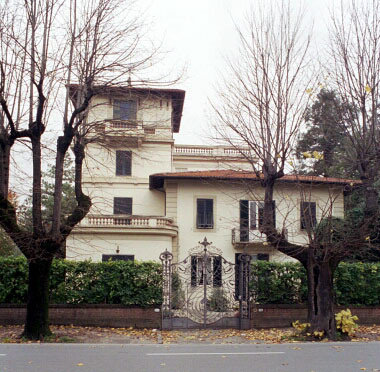 The building has an articulated floor plan which is based on that of a rectangle and is constructed on several levels, the highest of which is a turret with a hip roof. The remainder of the building is covered, in part with flat roofing, in part with hip roofing covered with a layer of Mareillais tiles.
The main façade, which looks onto via Civitali, is characterised by a forepart which is covered by a terrace which is in turn enclosed by a parapet of small glazed columns. Another terrace, resting on corbels with wrought iron railings, surmounts the front door.
The openings of the two floors on the main façade are highlighted on all sides by slightly projecting plaster fascias; plaster ashlar-work pilasters also vertically decorate the two outermost edges of this façade.
The four facades of the turret feature French doors with segments of stained glass which open onto a little terrace which rests on corbels and is enclosed with a parapet of small columns.
The main gate is of considerable interest, a masterpiece that features motifs typical of decorativism at the beginning of the century.
The building is a private property and cannot be visited inside.

Gaetano Orzali, the architect of the Villino Malerbi today Dinelli, designed the villa in 1910.
Between the time of its construction and the present day, there have been neither significant changes to the external appearance of the villa nor significant modifications to its interior. Therefore, the villa still appears the same today as it did when it was designed.
(source: Lorenza Caprotti - Centro Studi Cultura Liberty e Déco)

District: Piana di Lucca
Building dating: 1910
District/Location: The building is a private property and cannot be visited inside.
Get directions