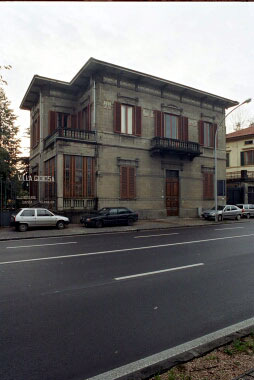 The articulated based building consists of two floors in addition to the cellar and has a pavilion roof surfaced with Marseillais roof tiles. The main façade of the villa looks on to viale Carducci, while the other sides face onto the garden. Constructed using squared brick stone work, it shows decoration in polychrome majolica and phytomorphic elements in plaster.
On the main façade on the ground floor there is a wooden entrance door and two side windows. This panelled door is decorated with flower motifs and the initial S. The architraves are characterised by geometric and phytomorphic figures . The window jambs are adorned with a carved stalk that finishes with a flower. The windows are joined by two cornices. One sits at the base and projects and is made of a succession of acanthus leaves. The other sits midway up and is characterised by geometric and phytometric motifs. Above the windows there is a cement corbel in the shape of a cord with a knot in the centre. On the left side there is a veranda covered by a terrace on the first floor and closed using two coloured pieces of glass which are joined using iron. The base of the veranda is closed in using a series of pilasters covered in green ceramics adorned with motifs of flowers and alternate pilasters in cement decorated in geometric and floral shapes. The architrave is composed of a cement fascia with four deer in light bas-relief that are positioned under the branches of a tree placed in the centre of the architrave itself.
The same decorative elements are repeated on the north facing façade. The ground floor is separated from the first by a decorative fascia featuring motifs of storks which are slightly projecting and enclosed in two cornices. Above the main entrance door there is a projecting terrace. It is supported by four corbels featuring phytomorphic motifs and encircled with a railing made of pilasters covered in green ceramic projects. The architrave of the French doors is adorned with phytomorphic and geometric elements while the jambs bear stylised motifs. The two side windows have decorative elements similar to those on the ground floor with the exception of a smooth rectangle which is present below the window sills. The three windows on the first floor are linked at the top by a light cornice featuring geometric motifs which is interrupted by rectangular elements in polychrome majolica, framed with ornamented studs, in which vases with bunches of grapes, flowers and birds in flight are depicted.
The eaves fascia is embellished using pink and green majolicas.
The building is a private property and cannot be visited inside.

The villa was projected in 1915 by an architect called Giovan Lelio Menesini (1882-1945). He was also responsible for numerous important buildings throughout the city of Lucca.
In order to use the building as a school a lift was built and the area between the villa and the garage was closed so as to host a dance school.
(source: Lorenza Caprotti - Centro Studi Cultura Liberty e Déco)

District: Piana di Lucca
Building dating: 1915
District/Location: The building is a private property and cannot be visited inside.
Get directions