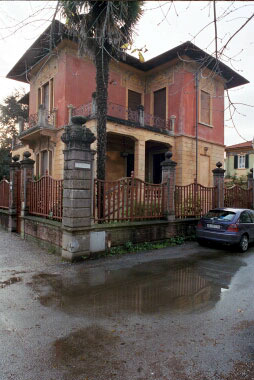 The little villa, built on a square base, consists of two floors in addition to the cellar and has a pavilion roof surfaced with Marseillais roof tiling.
On the front façade there is a small marble stairway which leads to the veranda closed by a columned balustrade. Above this on the south eastern side, there are two large hexagonal windows. The two main entrance doors are chiselled with designs of birds, and on the above iron bars you can read the initials B.D.
On the ground floor there are two windows of diverse shape and dimension. One of them is wider, hexagonal in shape and divided in the centre by a small pilaster then further divided into squared glass tiles. The other is surmounted by a depressed curved arch, decorated with phytomorphic motifs and divided in three by two pilasters. Under each of the two windows there are three rectangles bearing phytomorphic motifs.
The two side façades have three windows in line with each other. Under the window sill there are squares with floral decorations.
All the façades on the ground floor with exception to the back one, are decorated using ashlar reaching the cornice which marks floor division. On the first floor, the roof of the veranda forms a terrace whose railings are made from wrought iron and cement corner pilasters surmounted by pine cones. The architraves of the patio doors which open on to the terrace are painted with phytomorphic elements.
The eaves are characterised by a cornice under which an analogue decorated fascia runs along.
The garden which is looked onto by the little villa is enclosed using an wood railings divided by little cement pilasters and bricks facing outwards, surmounted by vases featuring figures and sea urchins. Two more powerful columns in imitation ashlar flank the gate.
The building is a private property and cannot be visited inside.

The little villa was projected in 1929 by the architect Gaetano Orzali (Lucca 1873-Genova 1954), who graduated from the Academy of Fine Art of Florence in 1897, and was an extremely important figure in Liberty style architecture in Italy. He was also the main personality of a family who made essential contributions in construction renewal in the city of Lucca between the 18 and 19 hundreds.
The appearance of the building standing today has not in any substantial way been changed either internally or externally and therefore the present little villa is as it was designed.
(source: Lorenza Caprotti - Centro Studi Cultura Liberty e Déco)

District: Piana di Lucca
Building dating: 1929
District/Location: The building is a private property and cannot be visited inside.
Get directions