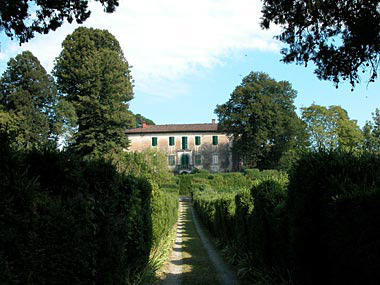 Villa Bertacchi , then later Biondi, is situated in the locality of Pozza in the district of Barga, in an area of territory that did not belong to the Lucchese Republic, although the characteristics of the villa have much in common with the buildings in the territory surrounding Lucca. Constructed across a hillside, the building constitutes a central body built on a rectangular plan with two lateral parts joined on to it which aren't as deep as the main body, and so, seen from the uphill area of the garden, appear to sit behind the central body.
The main entrance to the villa faces downhill. A curve lined gate opens onto a long avenue flanked by tall box-tree hedges. The tops of the hedges are cut in such a way so as to form a type of crenellation which continues until the avenue separates into two ramps (also curved) which climb up to reach the level of the façade. The main element of the façade is the staircase which is arranged into two flights of stairs that sit at opposite ends, and a terrace with a stone baluster. The windows on the façade are simply decorated in brickwork and stone which are lighter in colour than the plaster on the wall. The decoration also alternates between straight and curved lines: the windows on the top floor are decorated with straight lines while those on the lower floor are mixed.
The villa's interior remains substantially unaltered and conserves furnishings and objects, including the many volumes present in the library, belonging to the owners of the villa. From the windows of the hall on the first floor which are in line with the box-tree hedge lined avenue, you can enjoy a wonderful panorama of the Apuan Alps. The uphill area constitutes a threshing floor which is looked onto by the servants quarters. There is an exedra on the surrounding wall which is decorated with geometrical designs and made out of pebbles and jasper from Giuncheto.

The villa was built as a country residence during the first half of the 1600's by the Balduini family who belonged to the local nobility. According to documents found in the archives, which are in the possession of the present owners, it would seem that on the property, called "Villa dei Colli", there was a small two-floored palace with a threshing floor at the back and a farmhouse. At the end of the century when the Balduini family moved to Napoli, the villa passed on to the Bagnozzi family. On the ownership list of 1705, the villa is cited as belonging to the Bertacchi family, and they are responsible for the villa's present structure, be it the building or the layout of the park with box-tree hedges along the entrance avenue facing downhill and the new arrangement of the space at the back. In 1900, the villa was bought by the Biondi family, the present owners. The collection of volumes present in the villa's library is owed to Cesare Biondi, a doctor, and Pompeo Biondi, a jurist.

District: Mediavalle
Building dating: 17th and 18th century
Garden dating: 18th century
Fax: 0583 710775
District/Location: The villa can be visited on reservation every Wednesday from 15th April to 30th October.
Ticket price: 6 euro; 4,8 euro for children under the age of 8.
Telephone: 0583 723064
Get directions