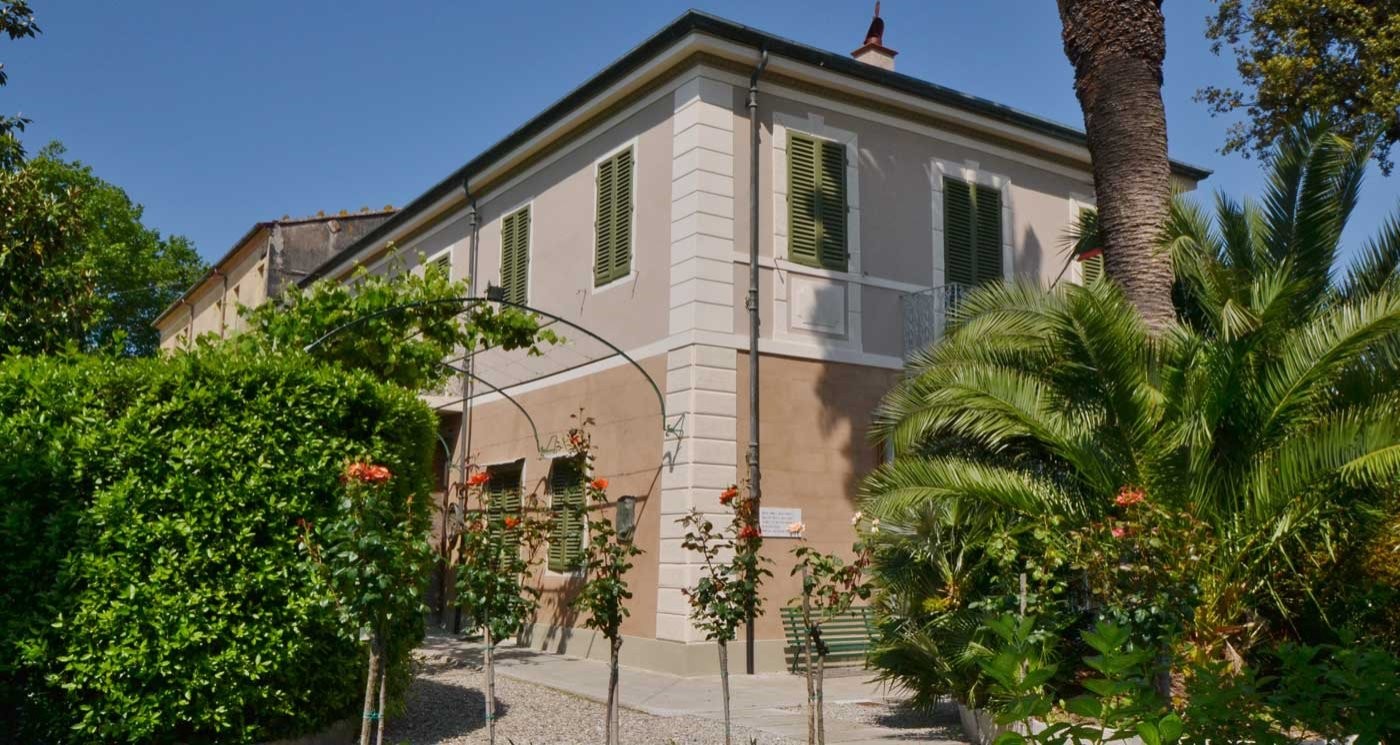 Villa Puccini in Torre del Lago, wanted by the musician, a passionate hunter and frequenter of the lake of Massaciuccoli, is an interesting example of how the architectonic typology and the concept of the "villa" itself was completely transformed in the period of Art Nouveau. The villa has completely lost its character as an economic unit in agricultural production, and the relationship between garden and territory is completely different as a consequence.
The garden surface is kept to a minimum, and it has been inspired, in its dimensions and in the irregular forms of the flower beds decorated with stones, by the Japanese garden in accordance to Puccini's passion for oriental culture.
The building was designed by Giuseppe Puccinelli, author of the Villa in Chiari.The edifice, with its rectangular shape, has two floors, and its forms are very simple and linear. A bow-window made of glass and iron links the main façade, situated on the short side, to a small garden which once looked directly onto the lake. The simplicity of the external of the house contrasts with the rich, eclectic decoration of its interior. Giacomo Puccini collaborated with Luigi De Servi, Galileo Chini, responsible for the fireplace and for the ceramic panel above it, and Plinio Nomellini, responsible for painted decoration on the walls in the realisation of the villa. In 1908, the the walls were covered with sheets due to dampness. The furniture of Bugatti and Tiffany are noteworthy as is the fan given to Puccini by the Japanese government. You can visit the chapel where the musician is buried on the ground floor which is the work of the architect Pilotti. The stained-glass windows are the work of De Carolis and the two low reliefs belong to Maraini, "Music that cries for the maestro" and "Music that outlives the maestro". Today the villa is host to the Villa Pucccini Museum.

In 1898, Giacomo Puccini bought a tower house, which he had rented in 1891, on the banks of the lake. Puccini collaborated with Luigi De Servi, Plinio Nomellini and Giuseppe Puccinelli in the defining stages of the construction project which included the demolition of the tower house. Only the foundation of this structure was to remain. The villa became Puccini's residence until 1921, the year in which he transferrd to Viareggio. Many of his most famous operas were composed in the study in Torre del Lago:
Manon Lescaut, La Bohème, Tosca, Madama Butterfly, La Fanciulla del West, La Rondine and Il Trittico. In 1926, a little room on the ground floor of the villa was converted into a chapel for the maestro's burial, dead two years before.