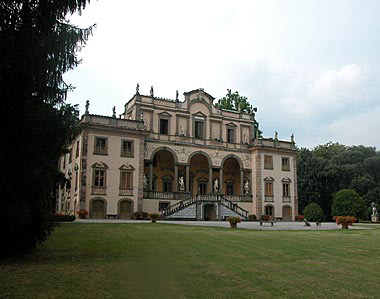 Villa Cenami, then Mansi, in Segromigno in Monte, is one of the greatest expressions of 17th century architecture in Lucca. The main façade, the plans for which being the work of Muzio Oddi, gives a visual effect of non-static solidity. Infact the building is quite high and the difference in length and width is not very great. However, the façade is vivid given that the central body, is higher, and stands slightly behind the two lateral parts. The airy portico on the raised floor, the two flights of stairs, the chromatic contrast between architectural and decorative elements and the plaster help give movement and lightness to the construction. The highest part repeats, in the matching columns and in the arched centre, the motive of the serliana which characterises the portico.
The very noteworthy canvas paintings and frescos found inside the villa are of the Lucchese painter Stefano Tofanelli and characteristic of the 18th century. They portray mythological themes according to the tastes of the times (stories of the God Apollo).
In the garden you can find fountains and fishing ponds with statues by the architect Juvarra, author of a 1700's park layout, which was later changed.

The history of the villa Mansi di Segromigno is widely documented, and it is possibile to reconstruct its principal construction phases. In 1599, the Cenami family bought a building that should have been constructed in the second half of the 16th century from the Benedetti family. The present building is in essence, due to modifications carried out in the second quarter of the 17th century. From 1634 to 1635 the activities of Muzio Oddi, an architect from Urbino, are documented. He worked on the construction of the walls of Lucca. Oddi's project was put into practice, but his letters to the Abbot Paolo Cenami, who was in Paris, show a precise intervention on the part of the latter in defining the project, be it concerning general ideas, be it in the management of details. Isa Belli Barsali therefore affirms that the authorship of the villa should be assigned to both of them. The architectural competence of the owners and their direct intervention in the projection of the villa, is a common characteristic amongst many Lucchese villas in the classical era.
In the 18th century, when the villa was already under Mansi ownership, the downhill facing façade was modified. The loggia on the second floor was closed and the present attic took its place, keeping in line with the architectural motives of the portico. A balustrade with statues was added to the crowning part of the edifice. G. Masson and E. Lazzareschi attribute these modifications to Filippo Juvarra, who was responsible for the garden arrangements, while I. Belli Barsali assigns them to the Lucchese architect Giusti.
The construction of the attic facing uphill dates back to the 19th century.
The park surrounding the villa has undergone noteworthy modifications over the course of time. Between 1725 and 1732 Filippo Juvarra had given the park a complex layout following French taste. This arrangement was changed at the beginning of the 1800's when the garden was modified following romantic tastes for the natural park. During the second half of the 20th century, further modifications were introduced with the addition of a parterre and puttos in plaster cast.