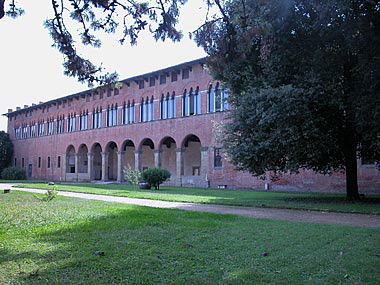 Villa Guingi "nei Borghi" was the residence of the Lord of Lucca, Paolo Guinigi and has the forms of a royal abode. The house has been developed in width, with a spacious portico supported by pillars on the ground floor, and a long series of three-light windows on the first floor, which sit alongside each other, and appear to form an open gallery. A slightly smaller portico can be seen on the opposite façade. Access to the villa's gardens was not in a frontal position thus increasing the extension of width effect. The square windows which are presently found on the attic floor, don't appear in the designs in 1533 and so are successive. Its structure composition has very little in common with precedent gothic villas (e.g. the villa Guingi in Pietrasanta) as well as with successive renaissance villas, because, as explained by Belli Barsali, villas of the same magnificence were not built in Lucca for a century, and after a century, tastes had clearly changed. Instead, the architectural proximity to contemporary Venetian villas has been highlighted ( a certain Niccolà of Venice worked for the Guinigi family in 1410, and there were many Lucchese merchants in Venice). This series of three-light windows on the façade were also present in the palace of the Municipality in Valpadana. Infact, as can be seen from the payments lists, many of the skilled men who worked in construction, came from northern Italy.
However, the villa does have typical Lucchese elements: the round arch shape of the three-light windows with little three-foiled arches supported on long slender columns, the use of colour on the façade on which appears the red colour of the brick, the grey colour of stone and the white of marble.
Today, the villa hosts the National Museum of the Villa Guinigi.
In the garden, terracotta statues from the villa Massoni of San Alessio are exhibited . The statues, like those of the villa Garzoni in Collodi, portray figures from daily life, a common practice towards the end of the 1700's.

From the chronicles of Sercambi, it would seem that work on the construction of the villa of Paolo Guingi, Lord of Lucca from 1400 to 1430, began in 1413 and continued with decoration and embellishment until the end of the Lordship of the Guigni family, when the villa was confiscated by the Republic of Lucca. The villa should have been almost ready in 1420 given the impending sumptuous wedding festivities for the marriage of Paolo Guinigi. The structure of the building has been changed very little despite the numerous changes of ownership and use (the villa has been used as a scenic space, a lazaretto, an orphanage and a hospital). However, the garden has been lost, the only part remaining being that of the surrounding wall and the entrance gate.