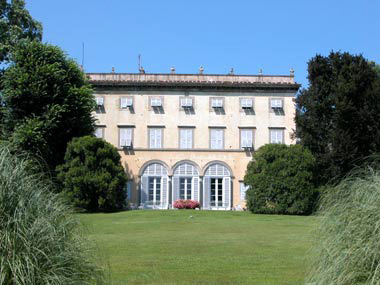 Despite 19th century interventions, the Villa Grabau, conserves harmony in its structure and a simplicity of form, which is very characteristic of renaissance architecture amongst the Luchese Villas. There are three floors to this square plan, the third being the attics. The light colours of the plaster unobtrusively show up the greyness of the stones which frame the windows and arches of the porticos on the façade facing downhill(which was converted into a.hall in the 19th century).
The villa is built in the position that Sanminiati, the author of an essay on 16th century villas, and owner of a villa, described as ideal: being built on the confines between the plains and hills with the main façade facing downhill.
The layout of the garden facing uphill, an external architectural jewel, is realised by dividing the park's area with terracing. The walls of the terracing, decorated in black and white mosaics, contrasts with the curved shape of the hedges of the Italian style garden. In the italian garden there are 100 centenarian citrus trees in cotto vases with the coats of arms of the family.
An effect of gradual fusion of the artificial work of man in nature and the Lucchese hills in the background is realised in the garden. This characteristic in the relationship with surrounding nature is also emblematic of the Lucchese architecture of the period, that keeps always in mind the insertion of the buildings in the distant panorama.
The two bronze mascerons on the fountains fixed to the terracing wall are noteworthy as well as the grotesque fountain (at present moved to the wood), attributed to the school of the mannerist sculptor Pietro Tacca (1577-1640) from Belli Barsali.
The lemon house in the garden is one of the most noteworthy in the Lucchesia, with its 7 doors and oval windows framed by Matraia stone ashlars. In the big park of the villa, rich of rare essences, an interesting verdure theatre is also found

Taking into consideration the distribution of space inside and the shape of the originally two-sloped roof, Isa Belli Barsali maintains that the building would have been constructed during the second half of the 16th century.
Studies carried out on behalf of the Grabau family attribute the construction (by the Diodati family) to the beginning of the 16th century. The original garden design is contemporary to the building's construction, while the use of space facing uphill is datable to the end of the 16th/beginning of 17th century.
In the 1800's, when the villa belonged to the Cittadella family, the part of the garden facing downhill was transformed into an English style garden and the building also underwent changes according to the fashions of that time. The portico of the façade facing downhill has been closed and is now a room with neoclassic decoration on the original walls. The roof has been redone adding busts made of marble in the cornices. Cornices have also been added to the windows on the top floor.