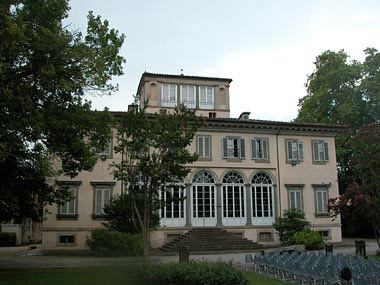 The Villa Buonvisi "al giardino", apart from being one of the most beautiful in the Lucchesia, played a very important part in Lucchese Architecture. Many villas were modelled on its composition plans and, in addition, it would seem that it was the model of the "ideal villa", outlined in Sanminiati treatise on the subject.
The plan for the villa is rectangular and comprises a basement, a raised floor, a floor above of a substantially lower height, and a central elevation with a loggia. At the back of the building on the raised floor there is a portico which gives access to the hall.
Wide openings, the play on symmetry and proportion among the architectural elements, give the villa a pleasant and harmonious lightness which is rarely found in other Lucchese villas. The vaults in the hall and those of the portico were frescoed by Ventura Salimbeni. The influence of Raffaello della Farnesina is visible in their realisation. These frescoes are the only remaining evidence of 16th century internal decoration among the Lucchese villas. Neoclassic decoration was added to the villa in the 1800's under the ownership of Princess Baciocchi. The entrance doors to the garden are noteworthy, in a bulky style decisively different from that of the building.
The entrance door to the nymphaeum, the first example of serliana in the Lucchese villas, has an ingenious and original composition. The columns are made alternating between rough and smooth material and have two statues of rivers on top, which, in their disposition, simulate the shape of a divided tympanum.

The villa was built in 1566 out with the surrounding medieval walls , in a zone cultivated with fruit and vegetables. Salimbeni's frescos found inside the villa, were started in 1593, and so the construction of the building must have been completed in that period. The authorship of the building's architecture and garden is much debated. Belli Barsali sustains that three architects worked on the villa: a non-identified architect for the building, Buontalenti on the entrance door to the nymphaeum, and Vincenzo Civitali on the entrance doors to the garden. Venturi had noted Ammannati's influence in the realisation of the front entrance and in the window of the surrounding wall. M. A. Giusti has attributed these works to Ammannati himself based on a design showing an example of a divided tympanum similar to the one in the villa. In addition, Guisti reputes that the realisation of the villa in its completeness is to be attributed to a collaboration between Ammannati and Vincenzo Civitali.

• The territory of Lucca