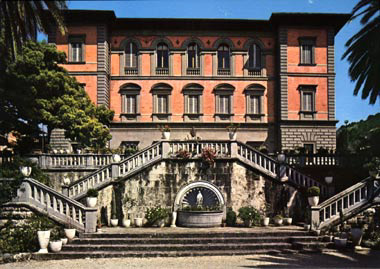 The Villa Borbone della Pianore is composed of three buidings, each one belonging to a different period. The north wing was built in 1964, the central body is dated to the end of the 18th century, and the south wing originates from the end of the 19th century.
The central body, which is the oldest part of the villa, is modest in its dimensions and is fruit of the restructuring of a mill. The Duchesse of Lucca, Maria Teresa di Savoia who was also the wife of Carlo Ludovico di Borbone converted it into a villa. A chapel was attatched to the building and many changes were made to it during the 1800's. Today, it has a curious neo-renaissance façade which was realised using a structure of painted wood with an architraved entrance, tympanumand a carved lunette which simulates the ceramics of Della Robbia. The structure was realised in 1893 on the occasion of the marriage of one of the Duke of Borbone's daughters. Inside there is a 17th century wooden altar, originating from the chapel of the Villa della Rinchiostra belonging to the Cybo Malaspina family.
The south facing 19th century building, is an impressive three floored structure which picks up on some architectural themes typical of the renaissance period. This is evident from itsashlars decoration, the curved tympanums above the windows and the plan of the building which has an indented central corpus. Its internal decoration is well preserved. There are caissons, damasks on the walls, stuccos and polychrome marbles.
The park, realised at the same time as the 19th century building, is extremely interesting as its vegetation presents a mixture of autochthonous and exotic herbs. Among them can be found ginkgo biloba, varies types of palms, sequoia, the liriodendron, the Olea Fragrans, the Os Manthus Ilicifolius, the Macula, and the Maonia.

The oldest building belonged to the Orsucci family who gave it up to Maria Teresa of Savoia in 1826. The Lucchese architect Domenico Martini worked on the the villa from 1878 to 1888. He was commissioned by Roberto di Borbone, the nephew of the Duke of Lucca, Carlo Ludovico and realised the impressive three floored building as well as the changes to the 16th century chapel. In 1893, on the occasion of the marriage of Maria Luisa, daughter of Roberto di Borbone to Prince Ferdinando I of Bulgaria, the wooden façade of the church was constructed. The layout of the park, coeval with the Martini construction, is the work of the architect and landscape painter Dechamps. In 1952 the Borbone family gave the villa up to the religious congregation Scuole di Carità Cavanis, and was used as a school. In order to accommodate the students of this boarding school, the north block was built in 1964 under the guidance of the architect Tempesta.

District: Versilia
Building dating: 18th , 19th, 20th centuries
Garden dating: end of 19th century
District/Location: The garden is open to the public. You must book in advance to visit the villa.
Telephone: Istituto Cavanis :0584 913155
Get directions