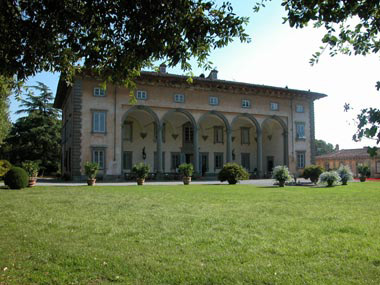 Villa Oliva in San Pancrazio is one of the great mannerist realisations in Lucchese architecture, and displays characteristics that distinguish it from the others. With a rectangular base, the villa has two floors plus an attic. The rear façade presents a wide and magnificent portico onto which look the windows of the hall on the first floor. The particular visible effect created by the grandiose arches of the portico, and the use of alternative ashlar in the corners of the edifice, make it obvious that the influence of Florentine architecture, and especially that of Ammannati, the architect who projected the reconstruction of the Palazzo degli Anziani in Lucca (1578-1581) is involved. The two gates should be pointed out. On the main gate facing downhill, imposing and massive, there is an alternation of rough and smooth surfaces on the fascias of the columns and in the rays of ashlars in the arches. On the inside façade of the gate, there are two noteworthy grotesque masks. The gate facing uphill, more sober and less impressive in form, is interesting for its elegant lines and its high relief mannerist decoration.
The park in the south zone is arranged with three terraces which sit perpendicularly to the façade. A tree lined avenue situated in the middle terrace leads to the ground in front of the villa. In the uphill facing zone, the space behind the edifice circumscribed by a semi-circle of holm oak hedges, has in the centre, a tufa grotto where there are waterworks. The park's fountains are very interesting, some of which are of mannerist stamp.

The first mentioning of the villa comes later on. Infact, it appears in a 17th century Terrilogio in which a plan of the garden and a design of the palazzo is present. This design shows the presence of a covered roof-terrace on the main façade which has now disappeared. Isa Belli Barsali hypothesizes that this villa would date back to between the last ten years of the 16th century and the first ten years of the 17th century given its structure (the plan, the front view, the covered roof-terrace). It recalls Villa Buonvisi al Giardino, a model which in the late 17th century, is not active. Such a hypothesis is not backed up by archival documentation. The garden and the interior of the building were rearranged in the 1700's, but the three terraced layout in the downhill part of the park and the presence of hedges in semi-circles at the back of the garden, date back to the original plans in the late renaissance period. Maria Adriana Giusti has noted that the particularly Florentine aspect of Villa Oliva along with the strong influence of Ammannati's architecture are due to the close ties which existed between the old owners, the Buonvisis and the Medicis.