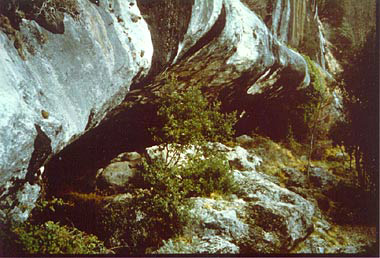 Grotta all'Onda is situated at a height of 710 metres above sea level on the slopes of Mount Matanna in the hamlet of Casoli. It is a large cave, 40X60 metres wide, and originally had numerous underground passages, which are today blocked up.
The enormous cave constitutes one of the most important examples of an uninterrupted occupation of a cave during a long period spanning from Prehistory until recent times.
The Neanderthal man was the first human who lived in the cave, hunting in the surrounding areas. The human groups left their flint instruments there along with the bones remains of their prey. Hunters of Upper Palaeolithic (Homo sapiens) lived in the more external part of the cave, where they set up a large hearth with numerous tools and bones remains of cooked animals.
Following on, Neolithic farmers and shepherds certainly built their own huts in the shelter of the vault of the big cave, and carried out their everyday activities for many seasons. The cave's continual occupation is documented until the Copper Age period, when new patterns were assimilated regarding ceramic decoration together with the use of new raw materials, imported from far-off areas, useful for making instruments. After the Bronze Age and until recent times, the cave was only sporadically frequented.
(text by Alessandra Berton, Marzia Bonato, Stefania Campetti, Laura Perrini)

The cave can be easily reached on foot by taking a footpath which leaves from Casoli hamlet, in the locality of Tre Scogli. Archaeological material discovered during excavations carried out between 1914 and 1944 are partly preserved in Florence in the "Museo Fiorentino di Preistoria" and partly in Pisa in the "Dipartimento di Scienze Archeologiche" at the University. Archaeological material recovered during excavations carried out by the "Museo di Camaiore" since 1996 are preserved and partially exhibited in Camaiore in the "Civico Museo Archeologico".

The first excavations which took place at Grotta all'Onda date back to 1867 and were conducted by researchers from the "Comitato per le ricerche di Paleontologia umana" of Florence. They worked there sporadically until 1944, reconstructing the main inhabitation phases in the cave. They also effected dating of the stalagmite found at the base of the stratum containing the Neanderthal lithic industry, obtaining a data of about 40,000 years old.
The "Civico Museo Archeologico" of Camaiore carried out new excavations since 1996 using more up- to- date and complex scientific methods which are supplying new and interesting data concerning the people who lived in the cave. Archaeological excavations, samples dating and scientific analyses are still in progress.
The most ancient prehistoric finds belong to the Mousterian culture (Middle Palaeolithic) relating to Neanderthal man and dating to around 40,000 years ago. It is a lithic industry, rich in flint tools, very similar to those found in Buca del Tasso, Grotta del Capriolo and other caves of the Alpi Apuane, as well as several carnivorous animal remains which predominantly belong to the cave bear.
Recently has come to light a level containing finds dating to the last phase of the Upper Palaeolithic, dating around 10,000 years ago: these artefacts included a hearth full of the bones of cooked animals and small flint instruments which formed the cutting part of spears and arrows used for hunting. There are many "backed tools", some just a few millimetres long, and very small round shaped scratchers which were typical of this period.
Even if the remains of huts, certainly built inside the cave, have not been found, the Neolithic stratum, whose finds date back to 5,000 years ago, has provided materials which testify the agricultural and pastoral activities carried out by the human communities permanently settled in the area. In particular there is a large number of grindstones for cereals as well as spindle disks, thus indicating the practice of weaving. There have also been found very small points of arrows and numerous small blades (less then 20mm in length) in obsidian from Sardegna area, which were obtained through trade exchanges during a period when sailing was widely practised. Even the use of some types of flints coming from the northern Italy used for small tools production, testifies the extent of commercial links with other Neolithic groups.
Contacts with Sardegna area are also evident from the shape and decoration of some pottery artefacts such as the small bowl with graffito decoration featuring a star motif, typical of Ozieri culture of Sardegna. Instead, some small bowls testify cultural influence of Neolithic groups from southern Italy, i.e. from Diana culture, originated in the islands of Lipari and present in many other areas in the southern Italy. Furthermore, the pottery assemblage allow to refer the cave occupation to the final phase of the Neolithic period, which was characterised by shapes and decorations typical of the southern France, Liguria and Lombardia ( the so-called Chassey-Lagozza culture) as well as by characteristic shapes from southern area (Diana culture). Very characteristic and numerous in this cave are also the polished bone awls and points realised with femurs of herbivores as well as pendants of teeth of small carnivores, pierced on the root.
During the following Copper Age dating back to 4,900 years ago, it is possible to evidence some elements which characterised the Neolithic period, such as the lithic industry in obsidian (but in lower quantities), the use of imported flint and the instruments in bone and polished stone. In particular the patterns of pottery decoration have been changed: the human groups largely used decorative impressed motifs, applied before the vessels were fired, with fingers and nails prints, "bugne" (small conical protuberances) and "notches" made with sharp tools.
Personal ornaments was widely used during the Neolithic and Copper Age and consisted in seashells, pierced or worked in a pendant shape, and in pearls of steatite, schist and marble. Some fragments of huge pottery containers, decorated with cordons and impressions, are dating back to the Bronze Age. The few finds relating to the Etruscan, the Medieval and the Renaissance periods suggest that the cave was inhabited just occasionally, probably for cults (Etruscan period) and sporadically for sheep-breeding activities in more recent times.
(text by Alessandra Berton, Marzia Bonato, Stefania Campetti, Laura Perrini