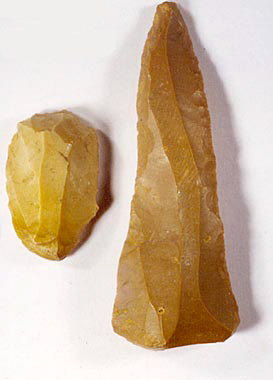 This outside settlement is located on a small embankment above the bottom of the valley of the Turrite Secca, a stream deeply set in the Apuan Alps, at a height of 510 metres, in the municipality of Careggine, in Garfagnana. Here there was a settlement with an extension of few metres, inhabited over a long period of time by groups belonging to the final phase of the Palaeolithic and then Mesolithic. They always periodically camped in the same area. Despite the lack of concrete remains of inhabited structures, the study of the many stone tools found, and the analysis carried out on the vegetal remains from the hearths, allowed to reconstruct the surrounding environment and the subsistence strategy of human groups. Archaeological excavations were carried out during 1976 and 1977 by the Dipartimento di Scienze Archeologiche dell'Università di Pisa.
(text by ALESSANDRA BERTON, MARZIA BONATO, STEFANIA CAMPETTI, LAURA PERRINI )

The remains of the settlement cannot be seen; the materials are conserved in the Antiquarium di Castelnuovo Garfagnana.

This settlement is very important, due to the existing continuity between inhabitation phases spanning from the Upper Palaeolithic to the Mesolithic period, although there is a break in the occupation of the site for thousand years. No huts or housing structures were found but, instead, numerous lithic tools were found in a limited area of the hearth, rich in carbon remains; unfortunately there is an absence of animal remains due to problems concerning the preservation of bone in the earth.
The stratum referring to the end of the Upper Palaeolithic dates back to 10,000 years ago, based on carbon remains, and provides an abundant lithic industry including small flint tools consisting in particular of scratchers and back tools as well as geometrically shaped instruments. Results from carbon of wood analyses show that a vegetation of laburnum bushes, maples, ash, hazelnut and a certain amount of silver fir, was present in the surrounding area, while the oak tree was rather scarce.
The settlement is important because it was frequented over a long period of time during the Mesolithic period, dating back to around 9,000 - 7,000 years ago. There was a very numerous lithic assemblage characterised by the presence of "backed point" and geometrically shaped artefacts in very reduced sizes (around 1 cm), which were used as "armatures" (sharp-edged pieces). They were then assembled into the sides of wooden spears for hunting and fishing purposes. During excavations, the Mesolithic stratum revealed gradual changes concerning the artefacts produced: while geometrical tools belonging to the older strata were half moon shaped, triangular shapes became characteristic in more recent layers.
Studies of the vegetation by carbons analysis reveal the presence of warmer species, compared to the final phase of Upper Palaeolithic, with an evident increase of deciduous oaks and white fir. In addition, a large quantity of carbonised nut shells was found at Isola Santa which must have surely integrated the man's diet, certainly along with other fruits and berries that have left no trace.
The abundance of nut shells has allowed to suggest that this settlement, situated at a medium altitude, was also used during the summer probably for its favourable geographic position, allowing the human groups to reach high mountains in a short space of time. Therefore, notwithstanding the fact that, in summer, during the Mesolithic, people usually moved from their settlements at the bottom of the valley towards the Apennine ridges to hunt game of high mountains and to collect flint, the Isola Santa settlement was never completely abandoned. These human groups returned regularly throughout the year in order to carry out their daily activities and pick fruit and other plants which were important for their survival.
(text by ALESSANDRA BERTON, MARZIA BONATO, STEFANIA CAMPETTI, LAURA PERRINI)