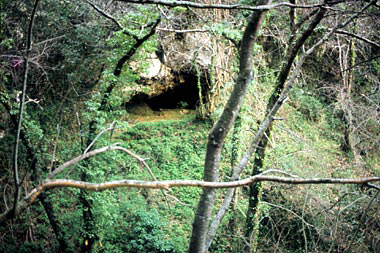 Buca del Tasso is situated in Metato hamlet, in the district of Camaiore, at 415 meters above sea level. It is a small cave that opens on the left of a stream called Carpigna, a tributary of Rio Lombricese. The cave, when discovered, was completely blocked up by filling up materials. Here, between 1914 and 1922, archaeological explorations were conducted in three excavations campaigns under the direction of the Comitato per le Ricerche di Paleontologia Umana di Firenze. They found stone instruments and bone remains of animals. Later studies led to the discovery of a human femur which can be referred to Homo neanderthalensis. Analysis carried out on the archaeological remains attribute the use of the cave to the final phase of the middle Palaeolithic, approximately 40,000 years ago. (text by Alessandra Berton, Marzia Bonato, Stefania Campetti, Laura Perrini)

Today it is very difficult to reach the cave. Some of the material is exhibited in the Museo "A.C. Blanc" of Viareggio while the cast of the Neanderthal femur (the original is conserved in the "Museo di Antropologia ed Etnologia di Firenze"), is exhibited in the "Civico Museo Archeologico" of Camaiore (Lucca).

Archaeological material found in the cave during excavations mainly consists of flint tools, lithic industry, which can be attributed, based on technical characteristics, to the final stages of the Mousterian, Neanderthal man's culture. These artefacts are of medium size and there is a clear predominance of denticulated flakes, as well as a strong presence of points and scrapers, typical tools of that time.
Animal remains consist of bones belonging to the cave bear (Ursus spelaeus), who regularly frequented the caves of the Versilia area, also for hibernating, during a long period of the Palaeolithic. Remains of animals typical of low temperatures, such as the ibex, chamois and marmot have also been recovered together with remains of animals like the hyena and leopard, testifying to a less rigid climatic phase. Archaeologists also found two molars belonging to the Rhinoceros MERCKI, an ancient rhino which was certainly hunted in the coastal plains, thus indicating a rather mild climate.
An anthropological study carried out by the Dipartimento di Scienze Archeologiche dell'Università di Pisa has revealed the presence of a fossilised Neanderthal femur belonging to a nine years old child, the most important archaeological find discovered in this cave. It is in fact the only example of Neanderthal bone remains found in Toscana and, together with teeth and fragments of human bone found in the Grotta delle Fate in Liguria, also represents the unique presence of Homo neanderthalensis in Central/North Italy.
Instead, in Lazio and Southern Italy, bone remains belonging to Neandertal man are much more common. The archaeological remains have not been dated, however, on the basis of studies of the lithic industry and fauna, scholars believe that Buca del Tasso was frequented both during a period of cold climate as well as during a following milder period of the final stage of the middle Palaeolithic, dating around 40,000 years ago.
(text by Alessandra Berton, Marzia Bonato, Stefania Campetti, Laura Perrini)