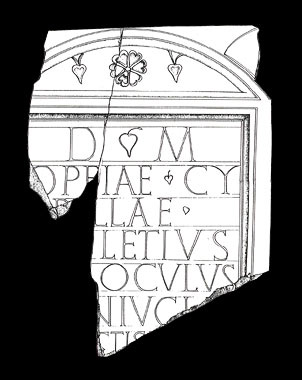 In Pievecchia, at the foot of the first hills rising between Capezzano Pianore and Pietrasanta, a series of findings have brought to light remains of constructions, fragments of inscribed tombstones and pottery belonging to a necropolis in use between the Ist and the IInd century a.D. and probably close to a rural settlement.

Remains cannot be seen; finds are kept at the Archeological Museum "Bruno Antonucci" a Pietrasanta.

In the 1930's, during agricultural works in Pievecchia, some graves, covered and closed by large stone, slabs were discovered; later rests of Roman constructions, potsherds and building material were found.
These findings point to a burial area used in the first centuries of the Empire and probably close to a rural settlement, in line with a custom attested at Crocialetto, Montiscendi, Pieve di San Giovanni e Santa Felicita and Cafaggio.
The discovery of two tombstones is of particular interest: the one marking the tomb of the legionary L. Cornelius Macer, a Lucchese belonging to the "Fabia" tribe and mentioned together with his son Primus, can be dated to the first decades of the Ist century a.D.; the second, datable between the Ist and the IInd century a.D., has a small arched pediment decorated with a rose amidst hanging buds; after an inscription dedicated to the "Manes", guardians of the dead, a husband, whose name can be only read in part, remembers his wife Oppia Cyrilla.