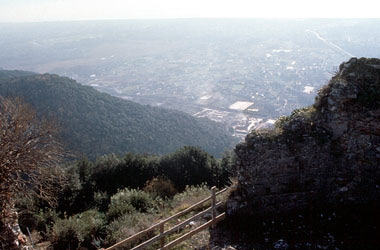 The area between the present day hamlet of Montiscendi and the bed of Lake Porta was probably in Roman times part of the territory of the colony of Luni and shows clear signs of the characteristic land division ('centuriazione') that was meant to regulate surface waters and distribute the land among the settlers (Roman farm of Montiscendi). In this area passed the via Aurelia-Aemilia, the main road between Rome and the northern Tyrrhenian coast.
(text by FABIO FABIANI)

The exact route of the Aurelia and Aemilia Scauri roads between Pisa and Luni is still a debated question. Scholars, albeit with slight differences in opinion, all acknowledge the existence of an inner route along the lower hills bordering the plain. In particular, between Pietrasanta and Porta, the present day Aurelia, an axis of Luni's ancient 'centuriation', probably follows the old Roman road. A number of necropoleis, such as Pisanica, San Bartolomeo in Brancagliano and Crocialetto, all found along the new road, confirm this conjecture since it was common in Roman times to place burial areas or funerary monuments on the sides of roads.
It has been suggested that another route existed along the coast: on the floor of Lake Porta or in the immediate surroundings, portions of road paving have been identified since the beginning of the XIXth century. In 1823, while ploughing the fields, a chipped marble milestone, today unfortunately lost, was found.
A recent exploration of the lake floor, promoted by the Archaeological Office of Toscana, has brought to light a portion of paved road with marble cobblestones; it was 4,20 metres wide and rested upon a coastal sand dune. Research is now under way to determine the precise chronology and route of this new road axis.