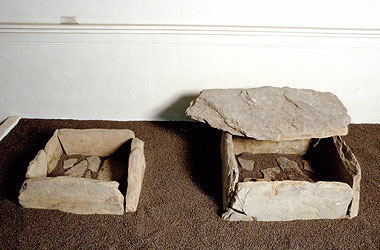 The Camaiore valley represented an important route climbing from the coastal plain and continuing through the Freddana valley; it connected the seashore with the Serchio valley and the plain of Lucca, already densely populated with Etruscan settlements (Via Squaglia; Chiarone) between the VIIth and VIth century b.C..
Later, during the Hellenistic period, the district, like all mountainous areas of the Versilia region, was occupied by Ligurian settlements.
At Serra di Vado, just inside the entrance of the valley, a "cippo a clava", of a kind already known from Etruscan tombs at Pozzi (Via del Poggione; Baraglino), along with three case tombs and Ligurian style grave goods have been found; they show the superposition, in the same area but in different periods, of necropoleis belonging to both cultures.

Remains not visible; the cippus and the case tombs are exposed at the National Museum of Villa Guinigi in Lucca.

At Serra, near Vado, in September 1957, during works in a clay quarry, three case tombs, of which one empty, were found. The cases were made of six slabs of local stone and measured approximately 35x35x30 cm.. The first, belonging to a man, contained an olla with the ashes of the dead and some bronze fibulae, covered by an upturned bowl; a small vase of impasto, a black glazed cup with horizontal handles and a few iron fragments were also found. Inside the second case tomb was an olla containing charred bones together with a cover bowl; a large fragment of dolio; seven bronze fibulae; spiral bracelet in bronze, decorated with engravings; two silver wire rings and a few amber beads: this goods, with its ornamental articles, shows that it was the tomb of a woman. The typology, as well as the goods, make the necropolis referable to a Ligurian settlement of the end of the IIIrd - beginning of the IInd century b.C..
At the same time, inside the quarry, a small "cippo a clava" with cone-shaped trunk, slightly sunken cap and small conical top, was found. The cippus, referable, for its typology, to the Vth - IVth century b.C., is what remains of a former Etruscan necropolis.
Besides these, a large number of graves containing no goods and which could not be dated, have also been discovered.