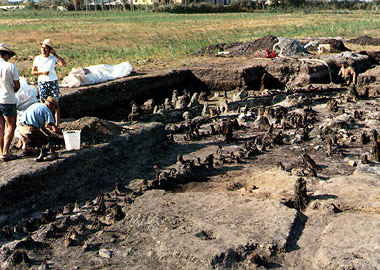 The area surrounding the lake of Massaciuccoli, that in ancient times must have been a vast coastal lagoon, has yielded proofs of human presence since prehistoric times. In a period between the Archaic and the Hellenistic Ages, the lagoon was occupied by Etruscan settlements living of commerce. This commercial function continued in the Roman Age, when the area was drained and represented one of the landing points on the Versilia coast.
(text by FABIO FABIANI)

Remains can be visited; a selection of finds is exhibited at the National Museum of Villa Guinigi in Lucca.

Between 1969 and 1970 an Etruscan settlement, placed on the ancient day shores of lake Massaciuccoli, has been explored; it shows signs of having been visited at least since the VIIIth century b.C.. The excavation permitted to show how in the Archaic Age, in a marshy area bounded by a double palisade and drained with a filling of wood and faggots, there were groups of huts made of perishable material and having a baked clay floor. A prefabricated terracotta well was provided for the group of dwellings found. The presence in the settlement, from the very beginning, of earthenware imported from southern Etruria and Greece, as well as of Corinthian, Ionic (Marseille type) and eastern Greek amphorae, proves that the village was a landing point on the commercial routes to Liguria and the French coast. The function of landing place and trading centre, after a period of decline in the course of the IVth century b.C., seems to have been revived during the IIIrd century b.C., when ceramics from Etruria and Latium were cleared towards the hinterland. The abandonment of the village, around the IInd century b.C., marked by substantial traces of fire, must be put in relation with the clashes between Romans and Ligurians for the control of the territory.
Not far from the settlement, the retrieval of a group of amphorae belonging to the Imperial Age, during the removal of sand, confirms that the place survived as a landing point in the Roman Age.