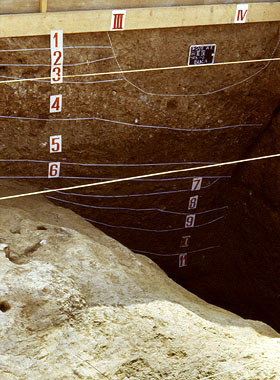 The hill of Romito di Pozzuolo (m 165 s.l.m.), on the foothills of the Monti Pisani south-west of Lucca, dominates a stretch of the Lucca plain; where in ancient times, there flowed a southern branch of the Auser that flowed into the Arno in Pisa, still testified by the Ozzeri canal. The Etruscan settlement was accidentally identified in 1984, during excavation works for an aqueduct. The action of the mechanical means, which opened a deep excavation on the top of the relief, caused the destruction of most of the archaeological sediments related to the most ancient settlement, of the late archaic and classical age, documented by the ceramic finds recovered later. An excavation essay, carried out in autumn 1985, allowed instead to investigate a portion of the subsequent inhabited area of ​​the Hellenistic age. In the Etruscan population system in the Lucca area, the formation of offshore settlements, which control the main communication routes, is an innovation of the final decades of the 6th century b.C.; in addition to Romito di Pozzuolo, Etruscan settlements in Monte Cotrozzi are known, still on the Monti Pisani, which dominates the way to Pisa through S. Giuliano, and to Montecatino, to control the Val Freddana, through between the Plain of Lucca and the Versilia.
(Text by SUSANNA BIANCHINI)

Remains not visible; some finds are exposed at the National Museum of Villa Guinigi in Lucca.

The older settlement (end of VIth - Vth century b.C.) was placed on a slope of the hill, made more regular by cuts and artificial levellings on the base of shaly rock. The dwellings must have been simple huts with a wooden structure and a covering of clay mixed with gravel. Among the finds we have pieces of pottery with short inscriptions in Etruscan letters, a clue that writing, which in this period in the area of Lucca appears to be a characteristic of the highland settlements, was fairly widespread. According to an attractive suggestion, these settlements, placed in a prominent position, had, perhaps, the role of administrating and controlling the agricultural settlements in the plain. Indeed, with the ecological crisis that during the second half of the Vth century b.C. upset the entire Etruscan population pattern in the plain of Lucca, the highland settlements, like that of Romito di Pozzuolo, also disappeared.
At the beginning of the IIIrd century b.C., after an extensive work of levelling, the site was newly occupied. The dwellings were still made of wood and mixed clay, but for the roofs tiles had been introduced.
Of particular interest is the discovery, in this settlement, of a small treasure trove of eight silver coins that were lost or deliberately hidden: three of them show the hippocampus swimming among dolphins and four a swan, maybe an allusion to the coastal lagoons. With great probability it is the Etruscan coinage of Pisa, both because the marine figures depicted well suit an important port and because of the area where they were found, that together with Romito di Pozzuolo also includes Bora dei Frati in Versilia
Among the many pottery finds from the excavation we have black glazed tableware of Roman (Lazio) and Etruscan production; fine 'grey' earthenware, very widespread and probably produced in the Pisan area, also used at table; kitchenware made of coarse impasto clay (ollae, basins, covers and storage vessels).
Wine amphorae from Etruria and Marseille, characteristic bowls produced in southern Etruria, as well as pieces of grindstones in volcanic rock, prove, along with the imported black glazed pottery, that Romito di Pozzuolo was fully integrated in the net of maritime trade that flourished during the first half of the IIIrd century b.C.; we can certainly affirm that the settlement had a prevalently commercial function.
The reasons of its abandonment, probably before the middle of the IIIrd century b.C., remain uncertain; it might have been influenced by events connected to the First Punic War (264 - 241 b.C.) or by the arrival of Ligurian populations in the Serchio valley.