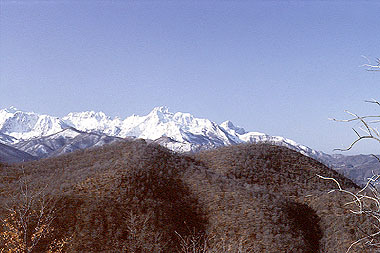 The Ligurian settlement of Monte Pisone (879 m. a.s.l.), a clue of which was already found at the beginning of the last century in a woman's tomb, today lost, near S. Romano in Garfagnana, has been explored in two excavation campaigns between 1983 and 1984.
Perched in a dominant position, on a relief of the slopes descending from the Apennines and bordering the upper Serchio valley, the settlement lies in the middle of an area densely populated by small Ligurian communities since the last decades of the IVth century b.C.; systematic surface explorations have revealed, in the territory of S. Romano, remains of other, smaller settlements near Madonna del Bosco and Sillicagnana. The settlement of Monte Pisone must have been a point of reference and maybe a common defensive position for the Ligurian populations devoted to sheep breeding, who, as we can tell from the frequentation of the Pania di Corfino and Sassorosso caves, moved seasonally onto the pastures of the Apennine ridge.
(text by SUSANNA BIANCHINI)

Remains not visible; some finds are exposed at the Permanent archaeological Exhibition of Castelnuovo Garfagnana.

The settlement is divided into different groups, placed both on Mount Pisone itself and on the neighbouring relief of Castellaccio, from where pottery, dating between the end of the IVth and the first decades of the IIIrd century b.C., comes. The archaeological exploration concentrated on the top of Mount Pisone where, in two separate areas, major terracing works, achieved with the help of stone blocks, some of which roughly hewn and levellings of gravel mixed with earth, have been identified.
The dwellings, made entirely of wood, were built on these largely artificial terraces. To the south, in particular, the remains of two buildings have been located; one of them, rectangular in shape, still retained its pavement made of trodden earth, crushed stones and sandstone slabs, as well as an inner stone shoulder and two hearths, maybe shared with the building next door.
Among the finds we have, though only in very small quantity, black glazed pottery of both Etruscan and Roman (from Lazio) production; however, most of the tableware used in the settlement, in particular cups and jugs decorated with red stripes and geometric designs, belongs to the local Ligurian production. Ollae for kitchen purposes, covers, storage vessels and spindles were also produced locally in a typical 'vacuolato' mixture. From the same settlement, finally, come pestles of polished stone, as well as articles for adorning and dressing up, such as fibulae, a buckle, a piece of bracelet, a vase-shaped green glass pendant and other necklace parts made of glass paste, some of which already attested in Ligurian tombs from the upper and middle Serchio Valley (Castelvecchio Pascoli). On the whole, the finds show that the settlement of Mount Pisone was abandoned just before the middle of the IIIrd century b.C., for reasons we ignore; at that time of relative stability and peace, the defensive requirements regarding the strategic position of the site had, in any case, fallen.

• Archaeological museum of the Garfagnana area