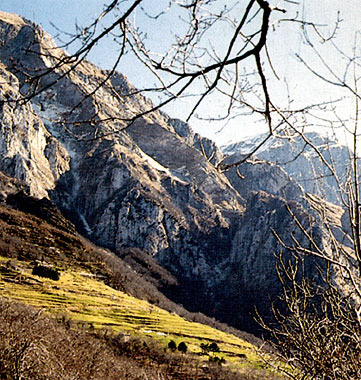 The deep fluvial valley of the Vezza is the most important Ligurian district this side of the Apuan Alps, well protected as it is behind the massive tower of Mount Corchia. Only the necropoleis of the important Apuan settlements controlling the valley have survived.
At Minazzana, on the right bank of the river, a man's tomb containing a helmet and a sword has been found.
In the area surrounding Piane Alte di Levigniani a vast necropolis, used between the second half of the IIIrd century b.C. and the beginning of the IInd century a.D., has been identified on different occasions.
(text by Fabio Fabiani)

The remains are not visible; grave goods are on display at the Archeological Museum Bruno Antonucci in Pietrasanta.

The necropolis, of which at least fifteen "a cassetta" tombs are known, was placed on terraces along the slope, to the foot of the big south-western wall of Mount Corchia. The tombs were gathered in nuclei corresponding to family groups and covered with stone piles.
The grave goods often consists of typical Ligurian pottery, such as the ollae used as cinerary vessels, decorated with rich geometric patterns in an orange hue of red on the light background of the vase. Next to these, the black glazed clay cups from northern Etruria (Volterra, Pisa) are a proof of trade with Etruscan settlements. In the men's tombs we find spearheads that have been broken or ritually bent; they are also present, though smaller, in the children's tombs. The presence of an iron axe, a sign of woodcutting, mentioned among the activities of the Ligurians by ancient sources, is of particular interest. The remarkable level of wealth reached by the community is confirmed by goods found in a woman's tomb, where, next to a cinerary urn painted in an orange hue of red and to two black glazed cups, numerous other personal ornaments had been placed: three bronze fibulae, a belt, probably made of leather (of which a hook and a series of eighteen ornate plaquettes remain), a bronze ring with smooth setting and a rich necklace composed of thirty amber beads. A soapstone spindle attests the task of spinning, performed at home by the women.
The necropolis is the only trace of an important settlement, otherwise unknown, that must have been abandoned by the beginning of the IInd century a.D.: the burial place fell into disuse, probably during the most violent confrontations between Romans and Ligurians.