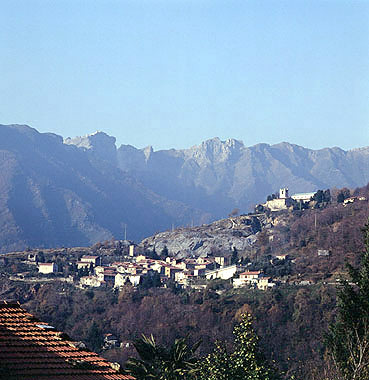 The valley of the Serra, from Monte Altissimo up to its confluence with the Vezza, where we find the village of Seravezza, has yielded, in its innermost section, the remains of settlements (Monte Altissimo) that can be ascribed to the Ligurian occupation of Upper Versilia, of which both the settlement of Monte Lieto and the necropolis of Levigliani bear witness.
Further down, at La Cappella, a tomb that still shows signs of the Ligurian tradition, although it belongs to the Roman period, has been found.
(text by FABIO FABIANI)

The tomb, with ashes inside it, was found in 1990, during works for the construction of a sports field. The burial, we don't know if in a simple pit or within a case of stone or bricks, included an olla, containing the charred remains of the dead, a basic set of articles for use at banquet, i.e. a red glazed cup and a kantharos of 'thin walled' clay, together with a Celtic type bronze fibula. The charred bones belong to a man, as the presence of the banquet set confirms. The type of earthenware used for the vessel with ashes, as well as the fibula, are evocative of the Ligurian tradition and show that, even after the Romans conquered the colony's territory, small groups of Ligurians continued to inhabit it. The burial can indeed be dated to the Ist century B.C. on the basis of the grave goods contained in it.
bibliography:
- Paribeni E., La Cappella (Seravezza), in Museo Archeologico Versiliese. Pietrasanta, Viareggio 1995