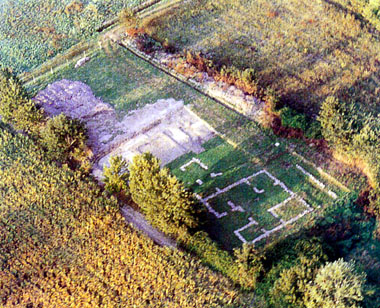 Situated in ancient times on the left bank of the lower Auser, the archaeological area of Fossa Nera, in the plain of Lucca, preserves substantial remains of a Roman rural dwelling built in the IInd century b.C. and occupied until Late Antiquity. The archaeological exploration, with systematic excavation campaigns conducted from 1987, has identified traces of previous settlement phases; in particular, remains of a Bronze Age village and of a Vth century b.C. Etruscan settlement. Recently, a second Roman settlement, also belonging to the IInd century b.C., has been discovered on the opposite bank of the river and is currently under exploration.
Like other sites in the plain of Lucca (Chiarone), Fossa Nera also shows periods of abandonment and of successive occupation, closely related to the particular environmental conditions along the lower course of the Auser, which, when the climate was unfavourable and in absence of substantial works of regulation, tended to overflow, flooding and swamping vast areas.
(text by SUSANNA BIANCHINI)

Part of the Roman remains can now be visited. Etruscan and Roman finds are kept in the deposits of the National Museum of Villa Guinigi in Lucca.

The Bronze Age settlement was discovered in 1984, when, following occasional excavations, a huge quantity of finds was retrieved to the west of the Etruscan, and later Roman, settlement. The collection of finds shows that the site was used for a long time, from the Middle Bronze Age until the transition period between the Recent Bronze and the Final Bronze Ages. The considerable presence of pottery, very similar to that found in the western part of the Po plain, is of particular interest and shows the existence of contacts and cultural exchanges, probably along the Serchio valley, with contemporary peoples on the other side of the Apennines. Bronze and amber finds also confirm the existence of ties with northern regions. A Bronze Age level has been found in the area belonging to the Etruscan settlement, underneath a particularly thick alluvial layer, indicating a long period of successive abandonment, partly due to the change of climate. The Etruscan settlement, although greatly damaged or, at any rate, difficult to define because of later Roman constructions, belongs to the period in which the Etruscan presence along the lower course of the Auser was strongest, between the end of the VIth and the Vth century b.C. (Chiarone; Tempagnano). The area must have contained a small group of dwellings with related annexes; the latter, in particular, include large holes that were probably used for storage. Near the dwelling area there were also two dumps, where much pottery was found. Among the finds that can be referred to this period, besides the usual impasto earthenware for domestic use and the grey or light-coloured tableware, there are also Etruscan and Greek wine amphorae, bowls and grindstones made of lava from central-southern Italy. After the abandonment of the Etruscan settlement, evidenced once more by a fluvial deposit, the area was occupied again in the IInd century b.C., during the Roman colonization. The Late Republican structure, remains of which can be seen today in the archaeological area, had a square layout and walls of partly hewn stones; its entrance was on the east and at the back there was a rectangular annex. Inside, a grape press has been found: in the room at the north-eastern corner a cocciopesto floor was connected with a tube to a basin situated outside, in the adjoining rectangular room. Starting from the Augustean Age, the farm was renovated and progressively enlarged with the construction of a rectangular wing to the south-east, large brick paved courts and a well. Further renovation works and extensions were carried out in Late Antiquity; many finds prove that the area was still intensively settled at that time.