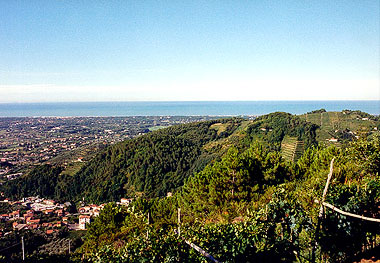 Between the IVth and the IIIrd century B.C. signs of the new balance created in the Apuan-Versilian region by the arrival of the Ligurians and by the more and more insistent interest of Rome in the area are to be seen in the disposition of the Etruscan settlements along the heights surrounding and dominating the Versilia plain. In this way, indeed, the Etruscan communities maintained a twofold control: on the coast, where their landing places and trading centres were situated, and on the mountainous hinterland. The Etruscans played an intermediary role in the commercial contacts with the Ligurians. On the hill of Bora dei Frati, that rises above the alluvial terrace of the river Versilia, there was a village, founded at the end of the IVth and abandoned in the second half of the IIIrd c. B.C., when direct confrontations between Rome and the Ligurians become more frequent and ruthless.
(text by FABIO FABIANI)

The village used to occupy a flat area on the side of the hill facing the sea, just under the hilltop. A massive wall made of large shale and limestone blocks contained the terrace on which, among other structures, a cottage has been identified and explored. The cottage was built placing a stone foundation directly onto the rock of the hill, made even for this purpose; a wooden structure covered with clay rested upon this foundation. The scarcity of tiles and roofing leads us to think that also the covering consisted of perishable materials. Inside, the cottage was equipped along its walls with a shoulder containing a cavity for the hearth. Various domestic activities are attested by materials found in the collapsed layers: spindles, spools and loom weights are proof of spinning and weaving, as the presence of linseeds further confirms; grindstones and grinders, a wooden spoon and a large pot containing broad beans are proof of the art of cookery. The presence of black glazed pottery produced in Latium and northern Etruria and of commercial amphorae from southern Etruria, the Campania-Latium region and Marseille shows relations with the ports along the coast. The condition of economic prosperity is further stressed by a silver coin showing the hippocampus, of Pisan mintage, according to a conjecture; three further specimens have been found in the contemporary settlement of Romito di Pozzuolo by Lucca. The cottage and, with it, the village were abandoned by the second half of the IIIrd century B.C.; there are no signs of its violent destruction.
bibliography:
- Paribeni E., Storti S., Vaggioli M. A., Bora dei Frati (Pietrasanta), in E. Paribeni (a cura di) Etruscorum ante quam ligurum. La Versilia tra VII e III sec. a.C., Pontedera 1990