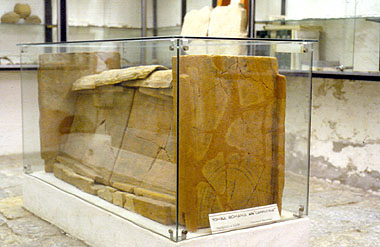 The alluvial terrace of the river Versilia was inhabited between the VIIth and Vth century B.C. by an Etruscan community. The economic vitality of this area was mostly due to the exploitation of marble quarries in the Apuan Alps and to contacts with the centres of Etruria by maritime commerce. Remains of dwellings (Casa Baldi), tombs with grave goods (Via del Poggione; Baraglino), as well as numerous marble tombstones ("cippi a clava") have been found. Besides, the area preserves considerable traces of the following Roman occupation, when it was probably included in the territory of the colony of Luni: we are, indeed, able to identify remains of agrarian settlements (centuriation), farms and burial areas. At Cafaggio, inside the small village of Ripa di Seravezza, rooms, probably belonging to a Roman farm, as well as a necropolis area containing simple and "alla cappuccina".
(text by FABIO FABIANI)

Remains cannot be seen; finds are kept at the Archeological Museum Bruno Antonucci in Pietrasanta.

During an emergency excavation by the Versilian Archaeological and Spelaeological Group, in the 60's, at Cafaggio di Ripa, the remains of a building, composed of at least two rooms and probably belonging to a Roman farm, were discovered.
The building, like other farms found in Versilia (Montiscendi, Ponte Rosso, Pisanica, Acquarella), appears to be part of the centuriation created in Roman times, i.e. of that network of roads and canals created within the frame of an impressive reorganization of the fields belonging to the colonies of Luni and Pisa. The excavation has yielded, besides covering material, such as tiles and roofing, also other material, of both local or regional origin ('thin walled' pottery, Italic 'terra sigillata', common table and kitchenware) and produced in other regions of Italy or in the provinces (African table and kitchenware), that proves contacts with neighbouring areas and with distant regions. In the same area, two graves with their relative goods (IInd-IIIrd c. A.D.) have been discovered, together with a further grave "alla cappuccina", equipped with small pottery vases (IIIrd-IVth c. A.D.). The group of tombs shows the presence of a burial area near to the settlement, as at Crocialetto, Montiscendi, Pieve di S. Giovanni e S. Felicita and Pievecchia.