Etruscan tomb of Via del Poggione 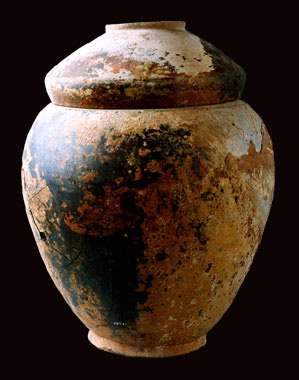 The alluvial terrace of the Versilia river was inhabited between the VIIth and Vth century B.C. by an Etruscan community. The economic vitality of this area was due mostly to the exploitation of marble quarries in the Apuan Alps and to contacts with the centres of Etruria by maritime commerce. Remains of dwellings (Casa Baldi), tombs with grave goods (Via del Poggione, Baraglino), as well as numerous marble gravestones ("cippi a clava") have been found.
Besides, the area preserves considerable traces of the following Roman occupation, when it was probably included in the territory of the colony of Luni: indeed, we can identify remains of the agrarian settlements (centuriation), farms and burial areas, such as the one at Cafaggio. In Via del Poggione a Ripa an Etruscan tomb, encased between stone slabs and, not far away, a "cippo a clava" , probably originally used to mark that very tomb, were discovered.
(text by FABIO FABIANI)

Remains are not visible. The finds from the tomb can be seen in National Museum of Villa Guinigi in Lucca and Archeological Museum Bruno Antonucci in Pietrasanta.

The case tomb was composed of six stone slabs. The ashes of the dead were preserved in two ollae made of bucchero and covered with cups showing a decoration of impressed rosettes. The cinerary urns were accompanied by two vessels in bucchero (one oinochoe and one kantharos), two iron spearheads and two small bronze mirrors. The cippo a clava, found in the proximity, was probably used to mark the case tomb, or a group of tombs. The marker, made of white Apuan marble, had a cone-shaped trunk and a bulbous base used for embedding it. Altogether it measured almost 3 m. and is so the highest among those found in Versilia.
The burial, within a stone case, proves the persistence of an ancient ritual (Iron Age), whereas the "cippo a clava" and the equipment of the tomb, datable between the end of the VIIth and the beginning of the VIth century B.C., belong to the Etruscan culture. The vases in bucchero, whose forms show that they were used to pour and drink wine, were produced in the Etruscan town of Pisa and suggest that the local community had adopted the custom of banqueting. The spears, finally, indicate the burial of a warrior, i.e. of a person belonging to the aristocratic class.
bibliography:
- Fabiani F., I cippi funerari versiliesi e il loro contesto, in Paribeni E. (a cura di), Acheronticae columellae. Cippi funerari della Versilia etrusca, Pietrasanta 1999