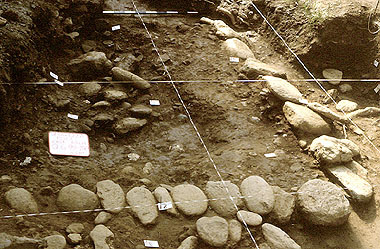 The alluvial terrace of the river Versilia was inhabited between the VIIth and Vth century B.C. by an Etruscan community. The economic vitality of this area was due mostly to the exploitation of marble quarries in the Apuan Alps and to contacts with the centres of Etruria through maritime commerce. Remains of dwellings (Casa Baldi), tombs with grave goods (Via del Poggione; Baraglino), as well as numerous marble gravestones ("cippi a clava") have been found. Besides, the area preserves considerable traces of the following Roman occupation, when it was probably included in the territory of the colony of Luni: we can, indeed, see remains of the agrarian settlements (centuriation), farms and burial areas, such as the one a Cafaggio. At Pozzi, during construction works for a cellar in the Casa Baldi, the rests of walls belonging to an Etruscan cottage and, maybe, also to a second older one have been found.
(text by Fabio Fabiani)

The cottage, with its quadrangular layout, was placed on ground which had been previously levelled and excavated in the middle to obtain a lowered floor. The outer band of earth, instead, was left out and formed a bank 25 cm above the floor. The walls, at their base, were made of rows of large cobblestones, whereas the higher portions, which are not preserved, consisted of perishable matter (a wooden framework, lighter materials and clay). Potsherds belonging to the cottage dwellers were reused in the course of time to compact the floor. The type of dwelling finds an exact counterpart in other areas of the territory, within the orbit of Pisa and also in the Etruscan part of the Po valley, suggesting a possible role of the Versilia region in the transmission of cultural models from the Etruscan heartland to Padan Etruria. Among the ceramics, besides tableware and storage vessels produced locally, we also find imported objects such as wine amphorae from Marseille and Athens and fine pottery decorated with figures from Attica, that show how the site was part of a large commercial network. In the second half of the Vth century B.C., after a long period of use, the cottage was abandoned and the process of decay, that lead to the collapse of the building, began. Not far away, a deposit containing rubble and pottery of the VIth c. B.C. has been explored: maybe the remains of an older cottage or of the first one's dump; the latter might therefore already have been there in the VIth c. B.C.. From this deposit comes a fragment of bucchero with an Etruscan inscription that, together with a few other inscriptions found at Baraglino and S. Rocchino, proves the presence, during the entire VIth century A.D., of a literate class using Etruscan language and script.
bibliography:
- Maggiani A., Paribeni E., Pozzi, Casa Baldi (Seravezza), in Paribeni E. (a cura di) Etruscorum ante quam ligurum. La Versilia tra VII e III sec. a.C., Pontedera 1990.
- Paribeni E., Pozzi, Casa Baldi (Seravezza) in Museo archeologico versiliese Bruno Antonucci. Pietrasanta, Viareggio 1995.