Pieve of SS. Giovanni and Felicita 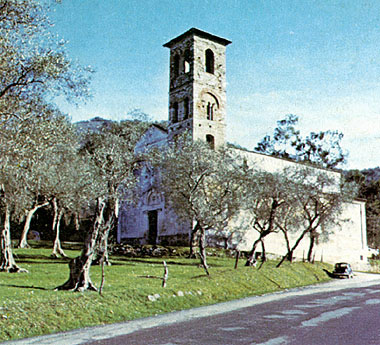 The Valdicastello valley, at the centre of Versilia, is distinguished by a great morphological variety: the stream Baccatoio flows through it and the Mount Lieto (1016 m a.s.l.) massif towers above it, while more gently sloping hills flank it right down to the stream's outlet in the plain. The considerable archaeological records give us a chance to follow its complex human events along a period of time going from Prehistory up to the early Middle Ages.
The presence of rich copper deposits has made the settlement of this area attractive since the age of metals when Aeneolithic people buried their dead in the Buca della Gigia and in the Tana della Volpe. Settlement, which during the initial phases of the lst final Bronze Age was concentrated at the top of Mount Lieto, in a position controlling the high pastures, tends, at an advanced stage of the final Bronze Age, to descend towards the foot of the mountain onto a hillock, at the place now called La Costa. At the beginning of the Iron Age, documented by the closing of a metal warehouse at Colle delle Banche, it descends further towards the plain and the sea, attracted by the trade developing along the coast, as we can tell from the settlement to which the Baccatoio necropolis belonged. Material which we can date between the Archaic Age and Late Antiquity, found near the parish church of S. Giovanni and S. Felicita , is proof of continuous human presence, up to the beginning of the early Middle Ages.
(text by FABIO FABIANI)

Pottery, found while ploughing land around the parish church, proves the existence of Etruscan settlements in this area between the VIth and IInd c. B.C.. In the Hellenistic Age the settlement possibly developed on a low rise close to the church, a place now called Castellaccio. As far as concerns the Roman Age, along with ceramic findings, we also have a piece of marble showing the lower portion of a life-sized female statue in long tunic and cloak; most probably it is a funerary statue, suggesting the presence of a necropolis next to the settlement, in conformity with a custom already attested at Crocialetto, Montiscendi and Cafaggio.
A group of finds, referable to a period between the Vth and VIIth c. A.D., among which ceramics produced in Africa, a rare bronze bracelet armilla of a kind found in the area between Campania and Toscana and a glass chalice of a kind found in Lombard burials of northern Italy, are of particular interest. The presence of these finds shows how vital and open to commerce the Versilia region was; they are further supported by the Vth-VIth c. A.D. African and Iberian amphorae found at S. Rocchino, a traditional landing point on lake Massaciuccoli.
bibliography:
- Paribeni E., Pieve di S. Giovanni e S. Felicita, in Museo Archeologico Versiliese Bruno Antonuci. Pietrasanta, Viareggio 1995