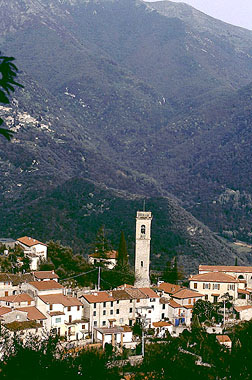 The Valdicastello valley, at the centre of the Versilia, is distinguished by a great morphological variety: the stream Baccatoio flows through it and the Mount Lieto (1016 m. a.s.l.) massif towers above it, while more gently sloping hills flank it right down to the stream's outlet in the plain. The considerable archaeological records give us a chance to follow its complex human events along a period of time going from Prehistory up to the early Middle Ages.
The presence of rich copper deposits has made the settlement of this area attractive since the age of metals, when Aeneolithic people buried their dead in the Buca della Gigia and in the Tana della Volpe. Settlement, which during the initial phases of the final Bronze Age was concentrated at the top of mount Lieto, in a position controlling the high pastures, tends, at an advanced stage of the Final Bronze Age, to descend towards the foot of the mountain onto a hillock, at the place now called La Costa. At the beginning of the Iron Age, documented by the closing of a metal warehouse at Colle delle Banche, it descends further towards the plain and the sea, attracted by the trade developing along the coast, as we can tell from the settlement to which the Baccatoio necropolis belonged. Material, which we can date between the Archaic age and Late Antiquity, found near the church of S. Giovanni and S. Felicita, is proof of continuous human presence until the beginning of the early Middle Ages.

The archaeological materials are kept in the Archaeological Museum of Versilia "Bruno Antonucci" of Pietrasanta.

In 1861, during the construction of the Genova-Rome railway, a necropolis, situated at the outlet of the Baccatoio stream, was identified. Only a description of the finds and two plates of drawings by the scholar Salvatore Bongi, eyewitness of the retrieval, remain today, while finds themselves have been dispersed. The necropolis consisted of over 50 case tombs containing the vessel with ashes and accessories. The cinerary vessel, a long necked spherical body mounted on a base, is closely related to those found at the Ligurian necropolis of Chiavari. The bronze accessories, such as open bar twisted wire bracelet (armilla), multiple chains with pyriform pendants and crescent-shaped razors, also show a striking resemblance with those found in Chiavari.
No trace remains of the settlement to which the burial area belonged. The necropolis appears to have become obsolete by the end of the VIIth c. B.C., when phenomena of assimilation to Etruscan culture become more and more evident in this territory.
bibliography:
- Maggiani A., Baccatoio (Pietrasanta), in Paribeni E. (a cura di) Etruscorum ante quam ligurum. La Versilia tra VII e III sec. a.C., Pontedera 1990