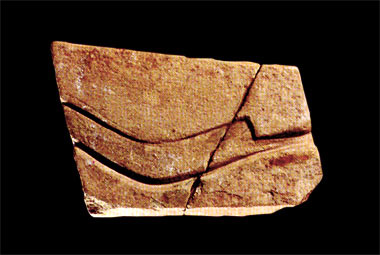 The Valdicastello valley, at the centre of Versilia, is distinguished by a great morphological variety: the stream Baccatoio flows through it and the Mount Lieto (1016 m. above sea level) massif towers above it, while more gently sloping hills flank it right down to the stream's outlet in the plain. The considerable archaeological records give us a chance to follow its complex human events along a period of time going from Prehistory up to the early Middle Ages. The presence of rich copper deposits has made the settlement of this area attractive since the age of metals, when Aeneolithic people buried their dead in the Buca della Gigia and in the Tana della Volpe. Settlement, which during the initial phases of the Final Bronze Age concentrated at the top of Mount Lieto, in a position controlling the high pastures, tends, at an advanced stage of the Final Bronze Age , to descend towards the foot of the mountain onto a hillock, at the place now called La Costa. At the beginning of the Iron Age, documented by the closing of a metal warehouse at Colle delle Banche, it descends further towards the plain and the sea, attracted by the trade developing along the coast, as we can tell from the settlement to which the Baccatoio necropolis belonged. Material, which we can date between the Archaic Age and Late Antiquity, found near the church of S. Giovanni and S. Felicita, is proof of continuous human presence, up to the beginning of the early Middle Ages.
On a hillock near the present day village of Valdicastello, in a place called La Costa, the presence of a settlement referable to the Latest Bronze Age has been traced; in the same place, much later, between the IIIrd and IInd century b.C., an Apuan Ligurian settlement was established.
(text by FABIO FABIANI)

Remains are not visible; material is kept at the Archeological Museum Bruno Antonucci in Pietrasanta.

Surface exploration and excavation probes have consented the identification, at the place now called La Costa, of a settlement referable to the transition period between the Latest Bronze Age and the first Iron Age. The ceramics found show forms and decorations characteristic of this period. Of particular interest is the discovery of a sandstone mould used for making knives, which proves the existence of metallurgy, connected to exploitation of the region's mineral resources. The descent of the settlement towards lower levels compared with the older village on Mount Lieto, seems due to the desire of controlling the paths along the valley as well as, more in general, those connected to the coastal area.
In the IIIrd-IInd century b.C. the place seems to have been newly occupied by a Ligurian settlement, probably devoted to agriculture and sheep breeding. Besides the locally produced ceramics, we also find fragments of black glazed cups, which prove that the community was part of commercial circuits in the upper Tyrrhenian.