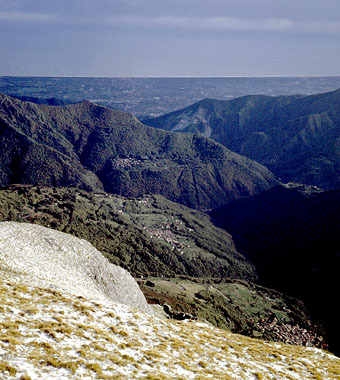 The Valdicastello valley, at the centre of Versilia, is distinguished by a great morphological variety: the stream Baccatoio flows through it and the Mount Lieto (1016 m a.s.l.) massif towers above it, while more gently sloping hills flank it right down to the stream's outlet in the plain. The considerable archaeological records give us a chance to follow its complex human events along a period of time going from Prehistory up to the early Middle Ages.
The presence of rich copper deposits has made the settlement of this area attractive since the age of metals, when Aeneolithic people buried their dead in the Buca della Gigia and in the Tana della Volpe. Settlement, which during the initial phases of the Final Bronze Age was concentrated at the top of Mount Lieto, in a position controlling the high pastures, tends, at an advanced stage of the Final Bronze Age, to descend towards the foot of the mountain onto a hillock, at the place now called La Costa. At the beginning of the Iron Age, documented by the closing of a metal warehouse at Colle delle Banche, it descended further towards the plain and the sea, attracted by the trade developing along the coast, as we can tell from the settlement to which the Baccatoio necropolis belonged. Material, which we can date between the Archaic Age and Late Antiquity, found near the church of S. Giovanni and S. Felicita, is proof of continuous human presence, up to the beginning of the early Middle Ages.
At the top of Mount Lieto, the presence of a Final Bronze Age settlement has been discovered, followed, much later, between the IIIrd and IInd century b.C., by a new settlement belonging to the Apuan Ligurians.
(text by FABIO FABIANI)

Remains cannot be seen; material is kept at the Archeological Museum Bruno Antonucci in Pietrasanta.

Some recent findings have helped to identify a vast settlement at the top of Mount Lieto (1016 m. a.s.l.), which is composed of several wide plateaus. Forms and decorations of the numerous pottery finds, still showing the influence of the Recent Bronze Age, suggest that the settlement must be placed at an early stage of the Final Bronze Age. The village, perched at the top of the mountain, sheltered a community mainly devoted to sheep farming and held a strategic position controlling the pastures.
Between the IIIrd and IInd century b.C., the mountain top was again occupied by a Ligurian village. Among the findings, together with locally produced vases, we also see black glazed ceramics and amphorae, material which was acquired by commerce with the neighbouring Etruscan populations. In particular, the fragment of a black glazed cup carries, etched on it, the beginning of an inscription in Etruscan characters (mi = I). The presence of millstones, grindstones and loom weights, as well as spindles, bears witness to the female arts of cooking, spinning and weaving.