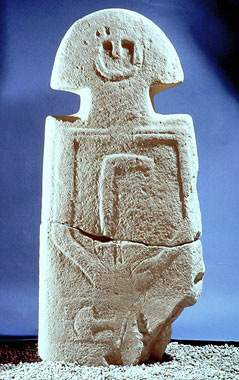 In the area around the Santuario del Soccorso, on the Lunigiana side of the watershed separating the valleys of Serchio and Magra, between 1964 and 1968, three men's stone-statues called Minucciano I, II, III, have been discovered by chance.
They are part of a production of statues, with more or less anthropomorphous features and carved out of large sandstone blocks, characteristic of Lunigiana ( i.e. the valleys of Magra and its tributaries) in prehistoric times, from the Copper until the beginning of the Bronze Ages and, after an apparent interval, in the Age Iron (VIth century b.C.).

On display, together with the statues Minucciano Ist and IInd, at the Museo delle Statue-stele della Lunigiana, in Castello del Piagnaro (Pontremoli - MS). Copies can be seen in the area of the Santuario della Madonna del Soccorso (Minucciano).

The stone-statue called Minucciano IIIrd, carved out of a single slab approximately one and a half metres high, is part of a group of three statues, similar in typology, discovered in the area of the Santuario della Madonna del Soccorso.
The head is elongated on both sides ("a cappello di carabiniere"), the neck, large and short, stands out from the body. Face and arms, slightly folded and stylized, are represented in bas-relief on the front of the slab. Some objects indicate that the statue is that of a man. An axe (similar to the wooden handled, bronze bladed one belonging to the man from Similaun and dated to the beginning of the Copper Age) and the dagger, with semicircular hilt and triangular blade, also attested as real metal objects, are elements useful for the dating the statue to the height of the Copper (between 2900/2800 and 2400 b.C.) or, eventually, to the beginning of the Bronze Age.
Compared with the group of over sixty stone-statues found in Lunigiana, all of doubtful provenance, Minucciano III is particular in so far as, after its discovery, an archaeological excavation was carried out (1971). This yielded evidence that the site was abandoned in the Iron Age, when a thick layer of mud, washed out from the mountainside, completely covered the fallen statue.
Therefore it can be assumed that the statue was raised before, at some time between the late Aeneolithic and the beginning of the Ancient Bronze Age, in conformity with the weapons represented on the statue. The frequentation of the site, where the statues probably stood lined up in rows, continued until the Bronze Age, as pottery finds confirm, and can be put in relation to the neighbouring routes and villages of the same period (e.g. the parish church of S. Lorenzo in Minucciano).