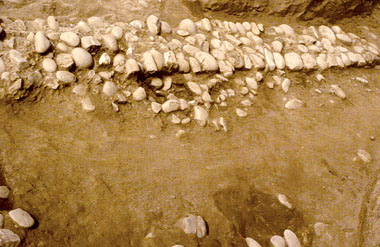 The Etruscan settlement of Tempagnano, discovered by chance during construction works, has been explored by archaeologists between 1988 and 1989. Situated in the plain of Lucca, about 2 km east of the town , it stands out among the settlements of the same period in the area of Lucca (Chiarone; Fossanera; Romito di Pozzuolo) for its dimensions, development and construction techniques. The settlement, maybe a proper village, centrally located in the plain of Lucca, might have been a reference point for the many agricultural settlements scattered along the lower course of the Auser.

Remains cannot be seen; some finds are exposed at the National Museum of Villa Guinigi in Lucca.

The archaeological exploration, divided in four sample excavations, has helped us to identify a rectangular dwelling, supported by wooden pillars lodged in large holes, of which three can be seen and bounded on one side by cobblestones; externally it had a waste pit and, maybe, a small porch. East of the dwelling, a portion of roadbed 1,50 m. wide, carefully laid out with rubble and consolidated brick, has been uncovered. To the south, a solid cobblestone barrier, probably the base of a wall in perishable material, bounded the living quarters and, perhaps, formed a gallery. At the east end of the explored area, finally, a wide pavement consisting of small brick fragments has been identified; it is referable to an open space, maybe a "piazza" or, more simply, a courtyard.
The settlement possessed communal facilities, a "piazza" and a road; their orientation corresponds surprisingly to that of the dwelling and of the wall bounding it to the south. These elements, together with the considerable extension of the area (about 1 hectare), make us to think of a planned village. A consistent fluvial sediment, similar to that found in other Etruscan settlements of the plain (Chiarone; Fossanera), covered the remains; layers and the material referable to the period when it was inhabited, only minimally preserved, were probably flooded and washed away. A particularly rainy period, during the second half of the Vth century b.C., was probably enough to break the delicate hydro-geological equilibrium of the Auser plain causing a crisis and the total abandonment of the Etruscan agricultural settlements. Among the finds at Tempagnano we have grey earthenware pottery, probably of Pisan origin, that replaced, from the end of the VIth century b.C., the "bucchero" tableware; other earthenware, maybe local, also used at table, as well as "impasto" kitchenware. Among the imported pottery we find fragments of Attic red-figure ceramics datable to the Vth century b.C., an Etruscan amphora, bowls from southern Etruria and a small ointment vase, in polychrome glass paste, of eastern-Greek manufacture.