Necropolis of S. Concordio - Via Squaglia 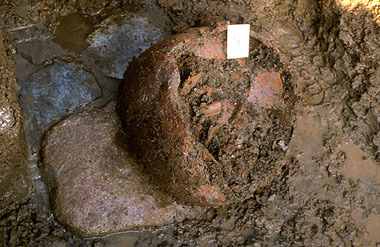 Found by chance in 1982 on the present day south-eastern outskirts of Lucca, the necropolis of Via Squaglia is linked to a small Etruscan settlement of the end of the VIIth century b.C. along the river Auser and represents, for this period, one of the most advanced outposts of Etruscan settlement in the plain of Lucca.
The excavation yielded eight undamaged tombs, while two or, maybe, three had already been unearthed in ancient times. Some pottery finds, that were successively retrieved near the necropolis, probably come from the same settlement.

Remains cannot be seen; finds are exposed at the National Museum of Villa Guinigi in Lucca.

The tombs consisted of an earthenware olla containing the ashes of the dead, covered by a large bowl in "bucchero" or fine baked clay; in some cases the olla containing ashes was protected by a "dolio", cut in half and placed upside down on it. Tomb 8, probably that of a woman, presents some peculiar aspects: the vessel containing ashes is an olla in "bucchero", its handles decorated with round impressions showing the "mistress of animals"; a cup, also made of "bucchero", served as cover and, inside the olla, six bronze fibulae, which may have originally been used to fasten the shroud with the ashes, were found. The remaining tombs didn't contain any additional objects.
Among the finds, both from necropolis and settlement, are "dolii" and "impasto" covers with stripes in relief upon them, a decoration common between the end of the VIIth and the first half of the VIth century b.C. in the Volterra and Fiesole regions.
Elements such as the way of burying, still belonging to the Villanovan tradition, the absence of additional objects in the tombs and the limited extension (2,50 m.) of the area, exploited by two or three successive generations, show that the necropolis must have served a small family settlement not unlike the one explored at Chiarone near Capannori.