Archaeological site of the church SS. Giovanni and Reparata 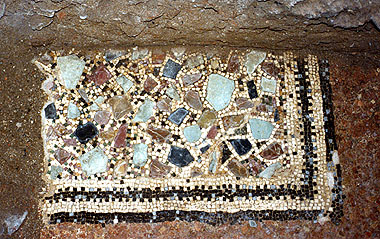 The church of SS. Giovanni and Reparata, together with its baptistery annex, is situated in the south-eastern part of the town and was built in the Vth century a.D. The complex was the first in the diocese to serve as bishop's residence until, at the beginning of the VIIIth century, the neighbouring church of S. Martino rose to the dignity of cathedral.
We have news of occasional archaeological findings, in particular around the baptistery, since the XVIIth century; the first deliberate excavation was carried out by Ridolfi in 1885.
The systematic investigation of the ground underneath the church, after which the present archaeological itinerary was opened, began at the end of the 60's. Between 1976 and 1977 the area of the baptistery was excavated: this was the first proper archaeological investigation, with the help of modern stratigraphic methods, in the city centre. An excavation probe under the apse and northern transept of the church was carried out later, in 1990.

The remains can be seen below the church, along a route traced for visitors. A large portion of Roman pavement, removed in the XIXth century, is on display at the National Museum of Villa Guinigi in Lucca.

Some of the pottery finds that were recovered during the excavation in the baptistery are, beyond any doubt, datable to before the foundation of Roman Lucca; although they were found in later layers, these objects are, up to now, the only signs within the town (Via Squaglia) that this area was actually frequented prior to the colony founded in 180 b.C..
The earliest preserved structures belong to the first period of life of the Roman town, between the Late Republicana and the first Augustean Ages: they are the rests of room pavements of a domus, a rich private house .
A small piece of cocciopesto pavement, with a pattern of crosses of black and white mosaic tesserae, can be seen in the western part of the baptistery, where it was discovered during excavations in the 70's; probably it was part of the identical pavement, removed during 19th century operations and now on display at the National Museum of Villa Guinigi. Two other portions of cocciopesto pavement are preserved in the northern transept: one enriched by an emblem of polychromous stones, inserted on a background of mosaic tesserae (scutulatum), the other light brown and without further decoration.
In the Imperial Age, between the end of the Ist and the beginning of the IInd century a.D., the area was certainly radically transformed; the walls and pavements that have been found, though inevitably difficult to interpret because of the missing parts, belong to a new building, this time probably not residential.
In the church's northern transept we see remains of walls and the bases of two columns belonging to a room that had a colonnade around a basin; other walls in the area of the apse define a corridor and two other rooms, to the north of the colonnade.
According to a recent reconstruction, the room with columns can be seen as a large frigidarium, a room with a basin used for cold baths and the remains might therefore be those of a thermal building. More uncertain is the interpretation of the structures found in the baptistery area, where, again, some findings suggest the existence of baths. Besides, it has been suggested that a quadrangular room belonging to the previous Roman building, with the simple addition of four perimetric apses, was used for the first baptistery.
Although these are but conjectures, destined to remain such, the size and the complex articulation of the IInd century building, with all probability public and not private, can be clearly seen.
In Late Antiquity the palaeocristian basilica, of which some portions of polychromous mosaic pavement still remain and the baptistery with its four apses were built upon well preserved Roman structures. Substantial changes, shown in the archaeological itinerary, were made in the course of the VIIIth, IXth and Xth centuries, until the new Romanic church was finally constructed, in the second half of the XIIth, more than two metres above the older palaeocristian basilica.