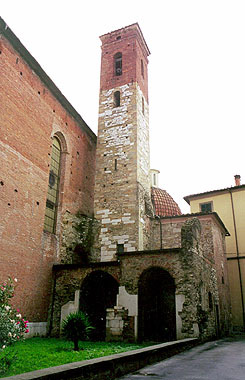 The Roman theatre was constructed in the north-western part of the ancient town, close to the circle of walls and not far from the northern gate (Lucca - Roman walls). The building was therefore located in one of the suburban blocks, anomalous for its dimensions, delimited to the south by the decumanus, today's Via S. Giorgio and to the north by the irregular course of the walls. (Lucca - Roman town).
Although we cannot date the theatre with certainty, a recent analysis of the remains reveals that it was probably built in the Earl Augustean Age, in the course of a general urban renovation that can also be seen in the area around the forum; this renovation was caused, or at any rate stimulated, by the arrival in town of new settlers in the last decades of the Ist century b.C..
In the Middle Ages, the bell tower of the church of S. Salvatore in Muro was built upon the ruins of this ancient monument. Perhaps the church was actually called "in muro" because it was originally constructed upon the ruins of the Roman walls; when it was later demolished, the church of S. Agostino replaced it.

Remains of walls of the ancient theatre are now visible near the church of S. Agostino, in the north-western part of the town. In particular at the base of the bell tower, to the south, along Via S. Sebastiano, where we find two spaces with vaulted roofs. A part of the walling can also be seen inside the church, incorporated in its southern wall. Some other remains are preserved in the buildings facing Piazza delle Grazie and in the block between Via S. Giorgio and Via del Panificio. The curvilinear course of the western side of Piazza delle Grazie clearly reflects the original shape of the theatre, with a semicircular layout; for the rest, unlike the amphitheatre, the monument is scarcely legible in the structure of the present town and cannot be fully appreciated at first sight.

The preserved remains permit us to reconstruct a semicircular ring, approximately 78 m. in diameter and 7,50 m. wide, divided into thirty internally convergent spaces (wedges) covered with a vaulted roof and placed on two levels. The external portion of the building presented two orders of open arches. The lower one provided a series of spaces that could be used as entrances (vomitoria) or utility rooms; the upper level, instead, together with part of the inward sloping vault, supported the highest portion of the cavea, the stands where the spectators were seated. The stage, certainly the most significant and important part of the monument, was built close to the town wall, and, together with it, has been completely lost. Of the two rooms visible near the church of S. Agostino, the southern one still preserves its original vault, with an arched lintel of tiles and evident traces of ribs; above, we see part of the walls belonging to the second level and, incorporated in the south of the bell tower, a portion of the vault belonging to a low ring-like gallery (crypt) that crowned the upper part of the cavea. The first space, upon which the bell tower stands, divided the cavea from the stage and served as entrance for important persons (aditus maximus). It was certainly lower compared to the other wedges: indeed, we can see traces of the original vault, now completely demolished, on the northern wall, just above present day ground level; upon this vault stood, probably, a balcony, a sort of stall reserved for important spectators. The semicircular cavea must have also had a supporting structure on the inside: up to now no traces have been found of this. It is therefore possible, as recently suggested, that only the external ring of Lucca's theatre was built of bricks, later largely reused for the construction of other buildings, while the internal parts were completed by a wooden structure. The building technique, i.e. the use of concrete with a face of white limestone ashlars and, in between, rare rows of bricks, can be found in other public and private buildings of the town dating from the Augustean period. Large blocks of cavernous limestone, a material widely used in Late Republican public buildings (Lucca- Roman walls), only to disappear definitely in the Imperial Age, are inserted here and there along the face of the theatre's wall.