The Roman town of Lucca 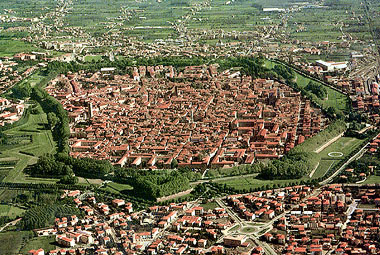 Like all newly founded Roman towns, Lucca was built according to a regular plan in which the urban space was divided into rectangular blocks by orthogonal road axes, 'cardos' and 'decumani'. The occasional discovery of sections of ancient paving preserved underground, has allowed us to reconstruct the original plan of the ancient town and tell the standard measure of the blocks.
In the course of time there have been slight shifts and changes to the roadbeds; only in a few cases, especially in the south-west sector of the town, the ancient network of roads has been entirely replaced by a new layout.
(text by SUSANNA BIANCHINI)

The material remains of the Roman town's roads are not visible, but a large portion of today's streets follows the ancient layout with slight changes, so that we can affirm that it is well preserved and can be appreciated during a walk.
Today the Roman testimonies inside Lucca are the Piazza dell'Anfiteatro, which was rebuilt on the remains of the Roman amphitheater, dating back to the 2nd century. AD, the Roman Domus, also known as the "House of the child on the dolphin", from the name of the splendid high-relief found in the house, discovered in 2012. And finally that is what remains of the old city walls that can be seen near the Church of the Rose both inside and outside.

The main road axes, cardo and decumanus maximi, at the end of which the gates of the city (Roman walls) were to be found, are today reflected respectively in the alignments of Via Fillungo-Via Cenami and Via S. Paolino-Via S. Croce. Still to be seen is the pronounced change of direction in the cardo maximus at the northern exit of the town, after it crosses Via Nuova and before it reaches the amphitheatre. Other cardos, roads oriented along the north-south axis, well preserved in today's road net, are those corresponding to Via Galli Tassi, Via Burlamacchi, the alignment of Via Vittorio Veneto-Via Calderia and Via Fatinelli; the last cardo to the east was placed along Via delle Chiavi d'Oro and, although it is preserved only for a very short stretch, it has been identified thanks to the discovery of a portion of roadbed at the foot of Torre Guinigi.
The layout of the decumani, oriented along the east-west axis, is reflected by Via S. Giorgio, that to the east might have continued along the town wall and by the alignments of Via S. Giustina-Via Buia-Via S. Andrea and Via Vittorio Emanuele-Via del Battistero-Via Vallisneri.
The last decumanus to the south is no longer visible, but it is quite possible that this road axis was along the north side of the cathedral of S. Martino and of the church of S. Romano. The construction of both churches, the position of which still partly respected the ancient road layout, must have very soon given rise to a new, more appropriate, road plan.
The town's blocks were rectangular in form, 120 x 105 m. (i.e. 4 x 3 ½ actus according to Roman measures), with the exception of a central strip, designed to contain the forum, that measured 140 x 120 m.. The forum was situated in today's Piazza S. Michele, referred to as 'in foro' by Early Medieval documents; remains of public and religious buildings have been identified along the west side of the piazza, in the block limited by Via Di Poggio and Corte Portici.
Smaller and irregularly shaped blocks, conditioned by the layout of the walls, were to be found along the eastern and northern sides of the town; one of these, probably in the time of Augustus, was used for the construction of the theatre. The reconstruction of the ancient plan has shown the perfect consistence between urban layout and contemporary division of the fields (centuriation), also based on orthogonal axes: the definition of the town's road axes appears to have been based on a 'centurial decumanus', corresponding to the present day Corso Garibaldi, which is 120 m. away from the first urban decumanus, reconstructed along the northern alignment of the churches of S. Martino and S. Romano; the cardo maximus of the town, moreover, represents the urban prosecution of a centurial cardo.