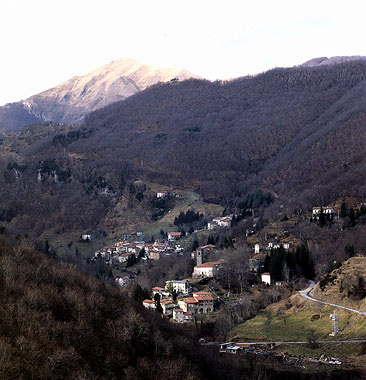 The cavern of Castelvenere, locally known also as "Capelvenere", "Casteltendine" or "Cascaltendine", opens, at 650 m. a.s.l., on the south-eastern side of Mount Penna di Cardoso, in the valley of the Turrite Cava, right tributary of the Serchio.
An excavation carried out in 1975 and subsequent archaeological investigations brought to light numerous finds showing that in ancient times the cave was used for a long time as a cult centre. The holiness of the place was certainly connected with the stream that flows directly out of the cavern, and the finds themselves confirm, at least for certain periods, the existence of a 'water cult' probably associated to its salutary and fertility spending characters.
(text by SUSANNA BIANCHINI)

The wide and stunning entrance of the natural cave can be reached on a footpath open to visitors. In the valley below the cave, the remains of a massive wall of uncertain date are visible. Part of the Etruscan finds are on display at the Nazional Museum of Villa Guinigi in Lucca.

The front of the cave, easily accessible through a vast entrance, is composed of a large natural room where a stream flows. During the excavation in 1975, archaeological remains were identified in the last room, inside some 'pools' formed by concretions and by the water's natural action. Other objects were later found outside, in particular along the stream, where they were probably carried by the the floods that regularly fill the cave with water.
Some of the finds, among others a small bronze dagger, indicate that the area was frequented since the Aeneolithic. However, findings relative to the Vth century b.C., when the cave was, indeed, intensely visited as a place of cult, are much more numerous. To this period belongs a set of anthropomorphous votive bronzes, more than thirty in all, found at different times both inside and outside the cavern and later called, because of their particular shape, "Castelvenere" group or type. They are small human figures, very schematic in form, between 4 and 5 cm high, with marked sexual attributes, both male and female; they often present linear engravings and a pointed lower end for fixing them in a socket or in the ground. There are also a few with different characteristics and less schematic in form, together with the small bronze figure of a dog. Finally, some fragments of Attic kylikes with red figures belong to the Vth century b.C. Etruscan period.
The popularity of this cult area in the Vth century b.C. is certainly related to the contemporary penetration of small Etruscan settlements in the middle and upper Serchio valley Ponte a Moriano), an important link with the Etruscan territories north of the Apennine; it is significant that a bronze figure of the Castelvenere type has indeed been found in an Etruscan settlement of the Enza valley.
After the Etruscan period, that left no visible traces beyond the Vth century b.C., the cave was again intensely used during the Roman period: the numerous coins found point to a long period of frequentation, from the Augustean Age up to the end of the IIIrd century a.D.. Particularly abundant are pottery finds datable to the Ist and IInd centuries a.D., for the most part fine earthenware, perhaps used for toasts or as votive objects (Italic cups made of 'terra sigillata' and decorated in relief, as well as thin walled pottery and other types of production). The use of oil lamps, attested for this period, might also be connected with worship practices.
The "rediscovery" and the vitality of the cult place, reflect the peculiar revival of settlements in the mountain areas of the Serchio valley, from the beginning of the Augustean age onwards; the following crisis, that by the IInd century a.D. had invested Lucca and its territory, is also reflected at Castelvenere, where, from the IIIrd century a.D., the fine pottery disappears and only coins show the frequentation of the area.
A small group of objects, among which are pieces of African terra sigillata and of glass goblets, confirm that the cavern was again in use in the VIth century a.D., perhaps in a last revival of the pagan rituals or, more simply, as a shelter during the difficult years of the Gothic wars and Lombard invasions.
The massive wall that was built just under the entrance, of uncertain date, seems to be have had a defensive purpose, closing the only access to the cave; inside the wall, made largely of stone found near the cavern, two Etruscan bronzes and a few Roman coins were also discovered.