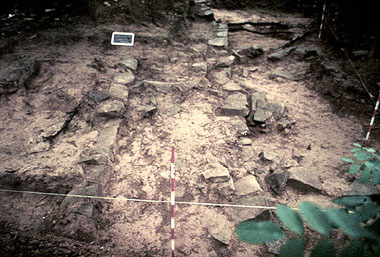 The Ligurian presence in the area around Colle delle Carbonaie was already known from the finding, at the end of the 19th century, of a burial area at Pian di Paolo (Villa Collemandina). The settlement to which the small Ligurian necropolis, the oldest one (final decades of the IVth century b.C.) so far discovered in Garfagnana, belonged, was perhaps situated on the slopes of the hill, where surface explorations preceding the excavation have yielded fragments of Ligurian pottery. Two excavation campaigns, both carried out in 1982, have explored the remains of a settlement higher up (640 m above sea level) and datable to the mid IIIrd century b.C. Like Monte Pisone, Colle delle Carbonaie was perched in a dominant position along a mountain path connecting the valley floor with the Appennine pastures, according to a typical Ligurian settlement pattern before the war with Rome.

Remains cannot be seen; some finds are exhibited at the Permanent archaeological Exhibition of Castelnuovo.

The small plateau, on which we find the remains of the IIIrd century settlement, is largely artificial and was obtained by the heavy work of terracing and levelling with gravel and stone chips mixed to earth. In its first inhabited period, the settlement was bounded to the north and to the south by two rather thick (1,20 - 1,40 m.) parallel walls (H and D); their face was made of partly hewn stones and they were the base of a fence, probably made of earth and wood. The dimensions of these structures reveal their defensive nature and the need for protecting the settlement appropriately, at least in its first period of occupation. Inside, the structures preserved, i.e. walls containing and supporting partitions, outline a composite dwelling with a large room and smaller spaces for facilities.
Successively, the complex was renovated and extended to the north, where we find a room with a hearth (G) and, perhaps, a second large room that, like the first, could have hosted an entire family. It is further probable, as structure H suggests, that the settlement continued onto the western part of the plateau, now collapsed. Among the pottery retrieved during the excavation we find, along with rare fragments of dark glazed earthenware, of Etruscan production only and together with the typical fine red glazed ceramics produced locally, a large quantity of kitchenware (ollae, covers and small containers for foodstuffs) mainly produced in a new technique compared to that found at Monte Pisone; this technique might have been imported from the Etruscan territories of Pisa, where it was commonplace in the IIIrd century b.C.. The increased frequency of exchanges with the Etruscan world is further attested by the presence of win amphorae fragments showing the beginning of wine consumption among the Ligurians.
Polished stone pestles spindles and loom weights, all of which bear witness to the exquisitely female work of spinning and weaving, have also been found. The desertion of the settlement, after the middle of the IIIrd century b.C., is probably connected to a change in the political situation: the progressive deterioration of relations with the Etruscans and the beginning of the war with Rome, indeed, produced a dramatic change in all the Ligurian settlements, both in Garfagnana Monte Capriola) and in the Versilia region (Monte Lieto; Monte Altissimo).

• Archaeological museum of the Garfagnana area