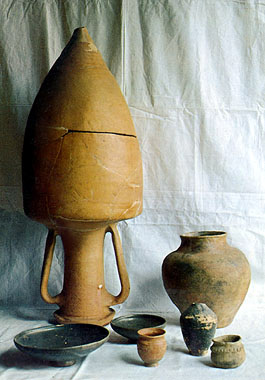 The Marlia territory is situated on the northern edge of the plain of Lucca, close to the slopes of the Pizzorne. In the Roman Age this area was part of the centuriated territory of the town of Lucca and to this day some traces of the ancient agrarian division (centuriation) are still visible. In the small necropolis, discovered in 1969 during building works at Ponticello, six tombs were found: four of them dating to the IInd century b.C., one Roman and one Lombard of the VIIth century a.D.. One more Roman tomb was discovered later in Marlia, near the "Officine Toschi".

Remains not visible; the Ligurian tombs with their contents are on display at the National Museum of Villa Guinigi in Lucca .

The four Ligurian tombs, dated to the central decades of the IInd century a.D., stand out for the use of wine amphorae, cut transversally and placed upside down in the ground, to protect the cinerary vessel and the grave goods. The cremated rests of the dead were put in an olla made of impasto and covered by a black glazed earthenware cup. The grave goods consisted of kitchenware (cups, "glasses", pitchers) and bronze objects used as personal ornaments and for dress; among these we find fibulae, a buckle and small studs or "buttons" for leather or textile clothing. One tomb, certainly that of a woman, contained an impasto spindle, as well as amber necklace beads.
The use of amphorae instead of the stone slab cases typical of Ligurian burials (Castelvecchio Pascoli; Levigliani; Vado di Camaiore) to protect the vessel with ashes is also attested, for the IInd century a.D.., at Ponte a Moriano, in the Valdinievole area and perhaps in Lucca itself; it appears to be a result of the adaptation and mixture of cultural elements from Apuan Liguria, found in the composition of the grave goods, with others characteristic of the Etrusco-Pisan territory and probably spread by the process of Romanization. The four tombs of Marlia, posterior to the establishment of Lucca as a colony, prove that small groups of Ligurians indeed survived; they accepted the new order imposed by the Romans, abandoned their original mountain settlements and were admitted into the cultivated area surrounding the new town.
The use of this burial area in the Roman period is proved by a grave, probably datable to the Augustean Age, containing an olla of impasto with ashes. In this grave, covered simply by brick fragments, signs of Ligurian culture are no longer to be found.
The existence, on the territory of Marlia, of scattered settlements during the Roman period is confirmed by another tomb, found near the "Officine Toschi", in which an amphora of the Augustean period is used to contain the ashes.
The burial area of Marlia-Ponticello was again used in the VIIth century a.D. for the inhumation of a Lombard chief, buried together with his arms (shield, lance and knife) and with a richly studded and finely decorated belt.