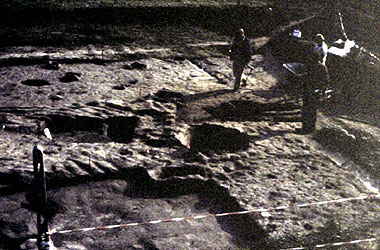 The Chiarone area, in the plain of Lucca, is situated along the ancient course of the Serchio, where the river, in a wide bight, receives
its right tributary Visona. The archaeological site, already known from explorations and substantial surface finds, has been subject to systematic campaigns of excavation between 1982 and 1990. The succession and the characteristics of the ancient settlements, that followed periods of total abandonment and have been identified here, illustrate, more generally, the complex history of rural settlements, first Etruscan and then Roman, orbiting around the lower course of the Auser. The specific environmental character and, in particular, the delicate hydro-geologic equilibrium of this area, played a decisive role in the vicissitudes of its ancient population.
The major part of the ancient settlements Via Squaglia; Fossa Nera; Tempagnano, attracted by the natural resources of the territory and its agricultural potential, was concentrated along the Auser, that crossed the plain dividing into different branches and so representing an easy route of penetration and communication; however, the very river, that in less favourable climatic circumstances could submerge or swamp vast areas, was certainly one of the main causes of the recurring phases of desertion.
From Late Antiquity onwards, the lower course of the Auser gradually turned into the wide basin of Sesto or Bientina, submerging the remains of the ancient settlements and consenting the preservation of many archaeological deposits like the one explored at Chiarone.

Remains not visible; finds are preserved and in part exposed at the National Museum of Villa Guinigi in Lucca.

The most ancient traces identified at Chiarone date back to the Villanovan period, to which the remains of a cottage and of other simple annexes can be ascribed. The impasto pottery that has been recovered, in some cases decorated with engraved geometric patterns or simply painted, can be dated to the second half of the VIIIth century b.C..
After an unclear period, in which the site was abandoned or, in any case, the archaeological sediments were lost, a new, more substantial occupation can be proved starting from the last decades of the VIIth century b.C.. The remains of dwellings and wooden structures, found in great numbers but not always clearly defined, show the progressive growth of the settlement during the VIth century b.C.. In this period, along with impasto pottery, sometimes decorated with impressed patterns or plastic applications, black bucchero earthenware, probably of Pisan production, also becomes common. Among the finds belonging to this phase we also have a bronze fibula decorated with engraved lines and circles.
In the Vth century b.C., at the edge of the older settlement, a new rectangular wooden dwelling with an annex, perhaps open towards the outside, was built; from here comes cippo a clava.
At this time the tableware in bucchero disappears and is replaced by new ceramic products of a grey or light brown-orange colour. In an area adjoining the house a small female bronze statue was found; it could be referable to a place of domestic worship.
The desertion of the Archaic and Classic settlements during the Vth century b.C. was probably due to flooding, like at Tempagnano and Fossa Nera; for the same reason we have lost the layers, most of which washed away, belonging to the period when the settlement was inhabited and a muddy river sediment covers the remains of the dwellings.
During the IInd century b.C., with the Roman colonization, the site was again occupied. Traces of simple wooden structures, arranged around a well, remain from this period; the commitment of the inhabitants towards making life possible again in the plain appears clearly from the presence, on the left bank of the river, of a roadbed of cobblestones that were taken from the river. Among the numerous finds that have been secured black glazed tableware, mainly of local production, is well attested.
The Roman 'farm', renovated in Augustean times with the addition of cobblestone walls, was completely dismantled around the middle of the IInd century a.D., leaving a vast surface, compacted by material from the demolition, for a final settlement attempt that goes on, maybe, until the beginning of the IIIrd century a.D..
Characteristic of this period is the italic "terra sigillata" and, starting from the IInd century a.D., also the African "terra sigillata" tableware. In the last period, along with agriculture and sheep breeding, fishing must also have played an important role in the economy of the settlement, as the large number of lead weights for nets suggests.
The definitive desertion of the area is a clear symptom of the economic crisis involving both the town and the rural areas, maybe, again, as a consequence of, or at least made more serious by, the territory's fragile ecological balance: the river, abandoned to itself, gained once again the upper hand on man's work.