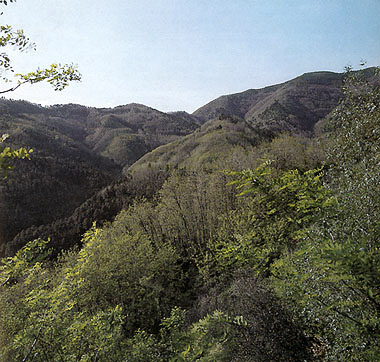 Placed on the ridge of the Pizzorne, that builds the watershed between the basin of the Pescia di Collodi and that of the Serchio, the site of Pietra Pertusa is divided into three hills between 900 and 960 m. above sea level, which dominate the course of the Serchio and a large portion of the plain of Lucca.
The peculiar place name (meaning 'perforated stone') derives maybe from the presence, on the central relief, of a pile of large blocks and slabs of sandstone, partly planted in the ground, that might be the rests of a collapsed "dolmen", megalithic tombs consisting of two or more vertical stones planted in the ground and surmounted by a horizontal slab, used by ancient peoples between the end of the 5th and the end of the 3rd millennium b.C.
The archaeological interest of the area was known for a long time thanks to the findings, from the middle of the 60's, of engaged local volunteers who performed surface explorations and retrievals during excavations for the opening of tracks in the woods. The information gathered and the finds point to a mid IIIrd century b.C. Ligurian settlement, that represents an important link between the Apuan Ligurian area of the Valdinievole and that of the Serchio Valley (Monte Pisone; Colle delle Carbonaie). Placed on the ridge dominating the river's narrows and the contemporary Etruscan settlement of Ponte a Moriano, the settlement of Pietra Pertusa is an example of the complex cohabitation, during the IIIrd c. b.C., between the Ligurian and the Etruscan world. (text by Susanna Bianchini)

Large sandstone blocks, maybe belonging to a megalithic complex of uncertain date and attribution, are clearly visible. The remains of the Ligurian settlement cannot be seen. Finds are kept in the storage rooms of the National Museum of Villa Guinigi in Lucca.

The Ligurian settlement touched all three of the hills into which the relief of Pietra Pertusa is divided, probably with small scattered groups of dwellings similar to those found at Monte Pisone. The position of the site puts Pietra Pertusa among a series of small Ligurian settlements, situated along routes following the mountain ridges, according to a settlement pattern characteristic of the Valdinievole area. The black glazed pottery, produced in Lazio and Campania, and the large number of wine anforae of south Italian origin that have been found, prove the vitality of trade with the Etruscans in the decades around the middle of the IIIrd century b.C.. In exchange for the goods arriving by sea at Pisa and at other landing points along the coast, the Ligurians offered the products of their sheep-breeding and woodland economy. The end of the settlement, in the second half of the IIIrd century b.C., together with the desertion of Bora dei Frati in Versilia, the bloody end of the Etruscan village of Ponte Gini di Orentano on the edges of the Auser plain and the general change of Ligurian settlement patterns, show a breakdown in the delicate cohabitation balance between Etruscans and Ligurians as a consequence of Roman expansionism.